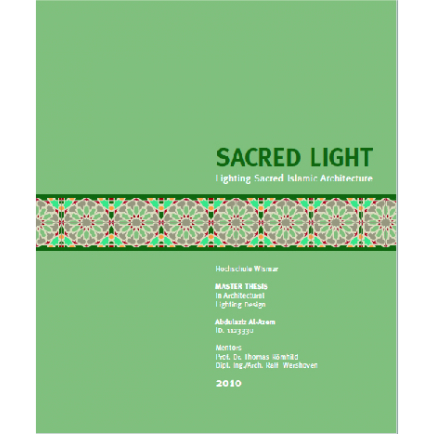 Light is one of Allah’s (God) greatest creations. Because of light we can see and perceive the beauty of nature and get inspirations to invent, build and even to write. Without light there will be no life.

The relationship between light and the religion of Islam is as old as Islam. The impact of light on Islam lies behind its significant importance on both the religious and social aspect. Muslims needed to know the times of the daily prayers that depend on the sun’s position; and the moon’s cycle for the Muslim lunar calendar.

From these religious motivations, light became a main concern for Muslims scholars a thousand years ago and what they produced lasted for centuries.

Since the birth of Islam, the mosque was the most important building due to its function where Muslims perform the second pillar of Islam which is praying.

After defending the mosque and its Major architectural characteristic, a deep analytical study of historical mosques from different periods and locations focusing on the Middle East region, and an overview of the use of natural and artificial lighting will give the best impression on how mosques were lit and how they should be lit in the present day.

After case studies and analysis, we can conclude with a comprehensive light guide which can be used as a design tool to create a proper lighting design for existing mosques and future ones. There will be no future without a past. By learning from the past, a better future is perceived.