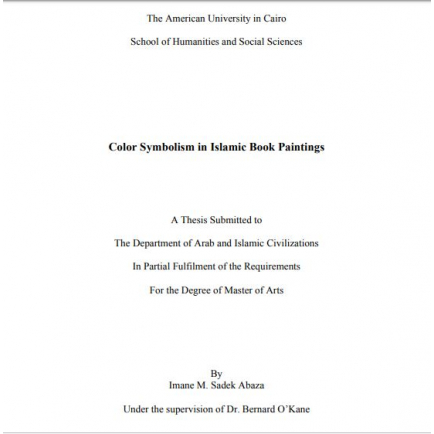 Light plays a central role in the Quran. The contrast between light and dark demonstrates a pivotal conception in the Islamic faith. It is the difference between knowledge and ignorance, faith and infidelity, and right and wrong. As depicted by al-Ghazali, God is the source of the ultimate light, and by seeing that light a person reaches a state of revelation since only the faithful see that light. The ignorant or unfaithful live in darkness without the light of God or faith to guide them through life. Considering the importance of this concept in the Islamic faith, colors as the depiction of this light in different states must be considered as equally important. Muslims across the centuries dedicated a great deal of attention to colors, manifested in their glorious repertoire of architectural marvels. The same attention can be observed in works of art. Although the use of colors is a topic many scholars paid some attention to, it should be visited from a different angle.
Usually colors are mentioned in a purely aesthetic or descriptive context to depict the range of artistic decoration in a work of art. Some scholars talk about colors in terms of availability of resources or from a utilitarian point of view. Articles or books that discuss color symbolism in Islamic art are rare. Many believe that the use of color was indeed a practical function of beautifying buildings or objects, but perhaps it was neglected based solely on misconception. Nasr in Islamic Art and Spirituality discussed the assumption that every artistic creation had a meaning and a purpose. "The creation of this artistic universe with its particular genius, distinct characteristics, and formal homogeneity underlying distinctions of a cultural, geographical or temporal nature requires a cause, for no effect of such immense dimensions can be considered as simply a result of chance or the agglomeration of accidental historical factors." Art historians and critics, in their pursuit to study and understand Islamic art, covered the iconographic, aesthetic, historical, economic and political aspects but very few considered color symbolism as an important factor. Color was treated from an aesthetic point of view (i.e. as a decorative tool).
The pigments, hues and quality of the color were always discussed under the decorative repertoire of the object of study. The meaning behind the chosen colors was rarely mentioned. According to Bloom and Blair, the lack of colored representation of architectural and decorative features in published books on Islamic painting directed the focus of many studies to form and design rather than color. Black and white illustrations were the norm in earlier publications and unless one gets the privilege of seeing the art object first hand, the variety and complexity of the colors used would not be grasped. In the study of book painting, the lack of colored plates in published articles and books might have led the focus of researchers to the composition of the paintings and the shading rather than the study of color, which diminished the value of the artwork in terms of artistic appreciation. Reading about color in a description does not have the same effect as seeing it.
The trigger of emotional responses is achieved by direct exposure to color. The aim of this study is to analyze color symbolism in Islamic book paintings in order to attribute the colors employed to religious, cultural or spiritual notions in Islamic tradition. It is an attempt to interpret color in relation to the Islamic doctrine with its mystical elements. This thesis will be based on theoretical analysis of primary sources such as Quran, hadith and Sufi writings, and their practical interpretation in book paintings. The metaphorical use of color in Islamic poetry and Sufi treaties has been long established, hence relying on these literary sources constitutes a logical starting point. The interpretation of the paintings will be primarily based on the following texts: Nizami’s Hayft Paykar, different account of the mi‘raj, hadiths, and studies of Muslim Scholars such as al-Ghazali, Ibn Arabi and Ibn Sina among others. Another important source of information for this study is the recent research by scholars such as Soucek, Schimmel, Cross, Blair and Bloom. They have contributed to the study of color symbolism in Islamic Art and their research has brought this field of study into the spotlight. Chapter one focuses on a study of the primary sources discussed earlier in relation to color symbolism. Chapter two examines the meaning of color in the Islamic tradition with reference to the different color theories developed by Muslim and contemporary scholars. Chapters three to five analyze Islamic book paintings in light of the Quran, hadith and Sufi writings. The focus will be on some selected paintings revolving around three main themes; the mi‘raj, Haft Paykar and Majnun and Layla; chapter three discusses the mi‘raj theme and prophetic depiction in book painting, chapter four explores the color symbolism in the tales of the seven pavilions in Nizami’s Haft Paykar. Chapter five examines the depiction of Qays or Majnun in different manuscripts.
Interpreting the religious, poetic and fictional type of narrative in relation to book paintings will shed some light on the importance of color symbolism in Islamic art in general and not only limited to Sufi themed paintings. The manuscripts chosen varies in their area of production from Iran and Central Asia to Turkey and Baghdad. The variation of the geographical location of the paintings are considered strong supporting evidence in the presence of color symbolism in Islamic art. Of course the main focus would be on Persian manuscripts since manuscripts production reached its peak in that geographical location coupled with the time constrains of not being able to display the entire selection of my research.