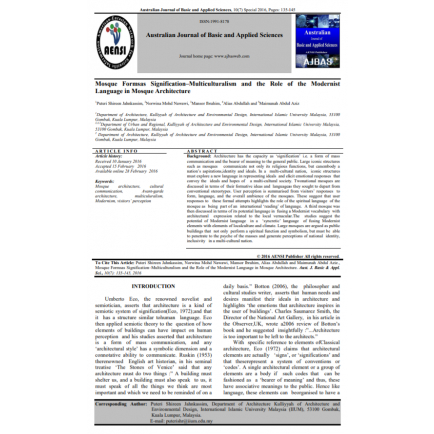 Architecture has the capacity as ‘signification’ i.e. a form of mass communication and the bearer of meaning to the general public. Large iconic structures such as mosques communicate not only its religious functions, but can embody a nation’s aspirations, identity and ideals. In a multi-cultural nation, iconic structures must explore a new language in representing ideals and elicit emotional responses that convey the ideals and hopes of a multi-cultural society.

Two national mosques are discussed in terms of their formative ideas and language as they sought to depart from conventional stereotypes. User perception is summarized from visitors’ responses to form, language, and the overall ambience of the mosques. These suggest that user responses to these formal attempts highlights the role of the spiritual language of the mosque as being part of an international ‘reading’ of language.

A third mosque was then discussed in terms of its potential language in fusing a Modernist vocabulary with architectural expression related to the local vernacular. The studies suggest the potential of Modernist language in a ‘syncretic’ language of fusing Modernist elements with elements of local culture and climate. Large mosques are argued as public buildings that not only perform a spiritual function and symbolism but must be able to penetrate to the psyche of the masses and generate perceptions of national identity, inclusivity in a multi- cultural nation.