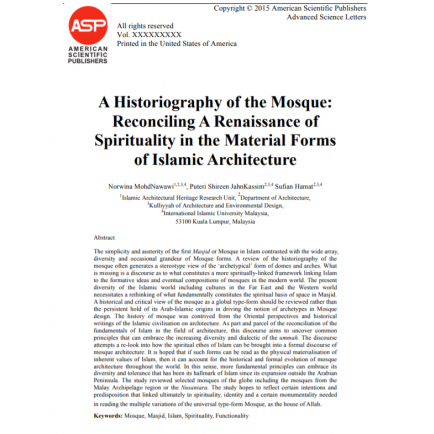 A Historiography of the Mosque: Reconciling a Renaissance of Spirituality in the Material Forms of Islamic Architecture

1. Introduction 2. Meaning 3. Arabian Beginnings 4. The Nusantara Region 5. Spirituality and its Formal Principles 6. Space and Form: Spiritual Phenomenology. 6.1. Emerging from the spiritual to the mundane in space 6.2. Spirituality as a generator of space and roof 6.3. The communal and supportive spaces 6.4. Universal patterns 6.5. Ornamentation as devotion 6.6. Markers (landmarks and reminders) & Minarets 6.7. Light 6.8. Water and Purification 6.9. Adab and Hijab (ritual and privacy) - Segregative space 7. Conclusion

The simplicity and austerity of the first Masjid or Mosque in Islam contrasted with the wide array, diversity and occasional grandeur of Mosque forms. A review of the historiography of the mosque often generates a stereotype view of the ‘archetypical’ form of domes and arches. What is missing is a discourse as to what constitutes a more spiritually-linked framework linking Islam to the formative ideas and eventual compositions of mosques in the modern world.

The present diversity of the Islamic world including cultures in the Far East and the Western world necessitates a rethinking of what fundamentally constitutes the spiritual basis of space in Masjid. A historical and critical view of the mosque as a global type-form should be reviewed rather than the persistent hold of its Arab-Islamic origins in driving the notion of archetypes in Mosque design.

The history of mosque was contrived from the Oriental perspectives and historical writings of the Islamic civilization on architecture. As part and parcel of the reconciliation of the fundamentals of Islam in the field of architecture, this discourse aims to uncover common principles that can embrace the increasing diversity and dialectic of the ummah.

The discourse attempts a re-look into how the spiritual ethos of Islam can be brought into a formal discourse of mosque architecture. It is hoped that if such forms can be read as the physical materialization of inherent values of Islam, then it can account for the historical and formal evolution of mosque architecture throughout the world. In this sense, more fundamental principles can embrace its diversity and tolerance that has been its hallmark of Islam since its expansion outside the Arabian Peninsula.

The study reviewed selected mosques of the globe including the mosques from the Malay Archipelago region or the Nusantara. The study hopes to reflect certain intentions and predisposition that linked ultimately to spirituality, identity and a certain monumentality needed in reading the multiple variations of the universal type-form Mosque, as the house of Allah.