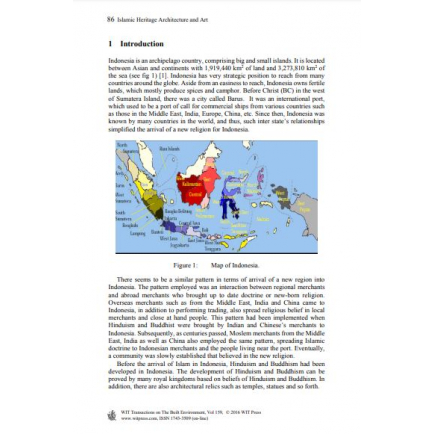 Changing A Hindu Temple Into The Indrapuri Mosque In Aceh: The Beginning Of Islamisation In Indonesia – A Vernacular Architectural Context

This paper elucidates on the process of Islamisation in relation to vernacular architecture in Indonesia, from its beginning in Indonesia’s westernmost province of Aceh, analysing this process of Islamisation from two different perspectives. First, it reviews the human as the receiver of Islamic thought. Second, it discusses the importance of the building (mosque or Mushalla) as a human praying place that is influential in conducting Islamic thought and identity both politically and culturally. This paper provides evidence for the role of architecture in the process of Islamisation, by beginning with the functional shift of a Hindu temple located in Aceh and its conversion into the Indrapuri Mosque. The paper argues that the shape of the Indrapuri Mosque was critical to the process of Islamisation, being the compositional basis of several mosques in other areas of Indonesia as Islam developed. As a result, starting from Aceh but spreading throughout Indonesia, particularly to its Eastern parts, Indonesia’s vernacular architecture was developed by combining local identity with Islamic concepts.