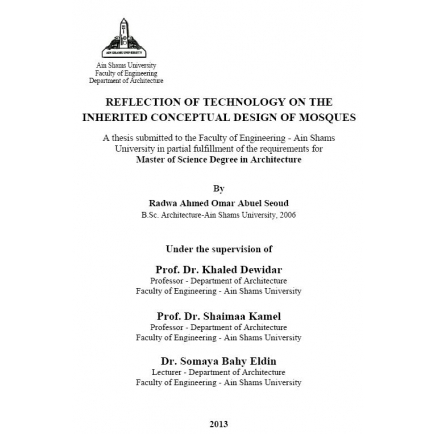 Reflection of Technology on the inherited conceptual design of mosques

The purpose of this study was to investigate the potentials of the new technology and its contribution in developing design concepts and the inherited values of mosques . Also the purpose of this study was to classify mosques architecture according to the architectural design approaches and describe the characteristics and development of each approach . The thesis also introduced the latest twenty first century technology applications , including materials , construction systems and techniques , building facilities , using computer aided software , and proposed the appropriate tools and techniques that can be used in mosques design in general . In this research , the analytical study was conducted in two procedures ; firstly , thirty mosques projects , selected in a timeline from 1975 to 2010 A.D , were analyzed and evaluated accordingly in terms of a design analysis framework ( Design concept , design approach , functional values , symbolic , aesthetic aspects and technology used ) . Secondly , a comparative analysis table was plotted to show the weight of the technologies used in mosques case studies on each value using the same framework . Finally , a detailed analysis was illustrated to verify the new technologies used in the case studies , and how it affected the inherited values of the mosque.