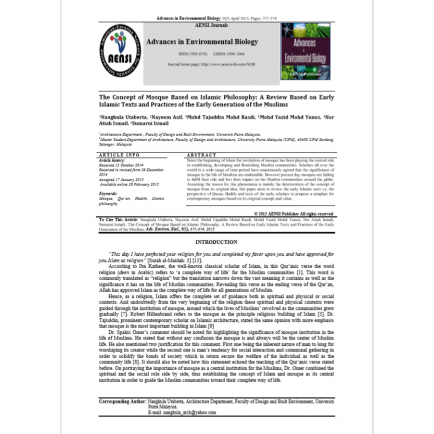 The Concept of Mosque Based on Islamic Philosophy: A Review Based on Early Islamic Texts and Practices of the Early Generation of the Muslims

Since the beginning of Islam the institution of mosque has been playing the central role in establishing, developing and flourishing Muslim communities. Scholars all over the world in a wide range of time period have unanimously agreed that the significance of mosque in the life of Muslims are undeniable. However present day mosques are failing to fulfil their role and lost their impact on the Muslim communities around the globe. Assuming the reason for this phenomena is mainly the deterioration of the concept of mosque from its original idea, this paper aims to review the early Islamic texts i.e. the perspective of Quran, Hadith and texts of the early scholars to propose a template for contemporary mosques based on its original concept and value.