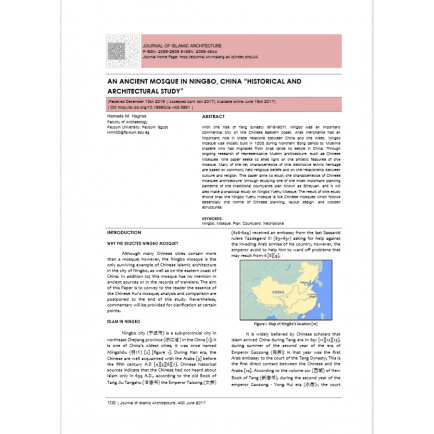 An Ancient Mosque in Ningbo, China “Historical and Architectural Study”

With the rise of Tang dynasty (618–907), Ningbo was an important commercial city on the Chinese eastern coast. Arab merchants had an important role in trade relations between China and the West. Ningbo mosque was initially built in 1003 during Northern Song period by Muslims traders who had migrated from Arab lands to settle in China. Through ongoing research of representative Muslim architecture, such as Chinese Mosques, this paper seeks to shed light on the artistic features of this mosque. Many of the key characteristics of this distinctive ethnic heritage are based on commonly held religious beliefs and on the relationship between culture and religion. This paper aims to study the characteristics of Chinese mosques architecture, through studying one of the most important planning patterns of the traditional courtyards plan Known as Siheyuan, and it will also make a practical study on Ningbo Yuehu Mosque. The result of this study shows that the Ningbo Yuehu mosque is like Chinese mosques which follow essentially the norms of Chinese planning, layout design, and wooden structures.