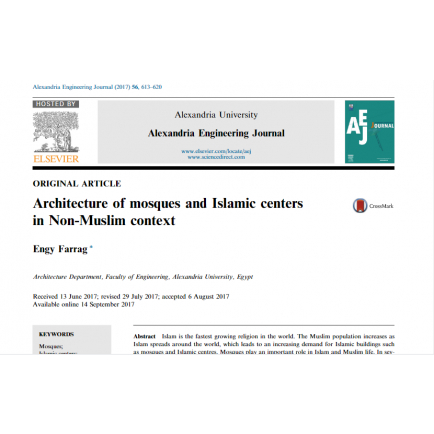 Architecture of mosques and Islamic centers in Non-Muslim context

Abstract
Islam is the fastest growing religion in the world. The Muslim population increases as Islam spreads around the world, which leads to an increasing demand for Islamic buildings such as mosques and Islamic centres. Mosques play an important role in Islam and Muslim life. In several countries, in particular, the Western mosques are seen as a newcomer whose building type is both unique and foreign to local people who are unaccustomed to the visual expression of Islam in the West.

The mosque is one of the most visual expressions of global Muslim religious identity in non-Muslim context. The significant numbers of countries have a lot of different architecture styles of their Islamic buildings. Each mosque has its own individual touch. The most important factors behind this variation in form and styles can be divided into nature impacts as (local materials and environment), followed by man-made impacts by (Muslim immigrants, colonialism, funding, and laws, culture, and traditions).

The study aims to examine each factor and their influences on the architecture of mosques and Islamic centers in non-Muslim context through analysis and a comparison of a number of examples.