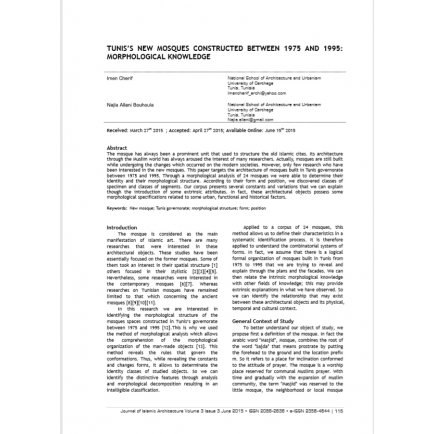 The mosque has always been a prominent unit that used to structure the old Islamic cites. Its architecture through the Muslim world has always aroused the interest of many researchers. Actually, mosques are still built while undergoing the changes which occurred on the modern societies. However, only few research who have been interested in the new mosques. This paper targets the architecture of mosques built in Tunis governorate between 1975 and 1995. Through a morphological analysis of 24 mosques we were able to determine their identity and their morphological structure. According to their form and position, we discovered classes of specimen and classes of segments. Our corpus presents several constants and variations that we can explain though the introduction of some extrinsic attributes. In fact, these architectural objects possess some morphological specifications related to some urban, functional and historical factors.