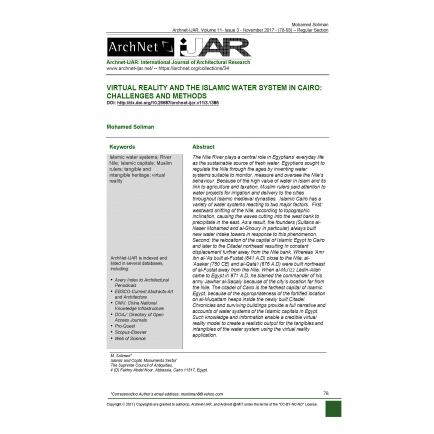 Virtual Reality and the Islamic Water System in Cairo: Challenges and Methods

The Nile River plays a central role in Egyptians’ everyday life as the sustainable source of fresh water. Egyptians sought to regulate the Nile through the ages by inventing water systems suitable to monitor, measure and oversee the Nile’s behavior. Because of the high value of water in Islam and its link to agriculture and taxation, Muslim rulers paid attention to water projects for irrigation and delivery to the cities throughout Islamic medieval dynasties. Islamic Cairo has a variety of water systems reacting to two major factors. First: westward shifting of the Nile, according to topographic inclination, causing the waves cutting into the west bank to precipitate in the east. As a result, the founders (Sultans al-Naser Mohamed and al-Ghuri in particular) always built new water intake towers in response to this phenomenon. Second: the relocation of the capital of Islamic Egypt to Cairo and later to the Citadel northeast resulting in constant displacement further away from the Nile bank. Whereas 'Amr ibn al-'As built al-Fustat (641 A.D) close to the Nile, al-'Askar (750 CE) and al-Qata'i (876 A.D) were built northeast of al-Fustat away from the Nile. When al-Mu‘izz Li-Din Allah came to Egypt in 971 A.D, he blamed the commander of his army Jawhar al-Saqali because of the city’s location far from the Nile. The citadel of Cairo is the farthest capital of Islamic Egypt, because of the appropriateness of the fortified location on al-Muqattam heaps inside the newly built Citadel. Chronicles and surviving buildings provide a full narrative and accounts of water systems of the Islamic capitals in Egypt. Such knowledge and information enable a credible virtual reality model to create a realistic output for the tangibles and intangibles of the water system using the virtual reality application.