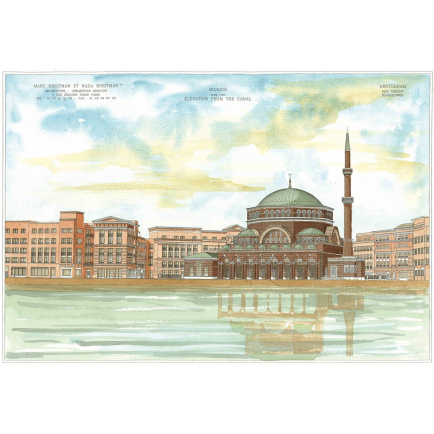 This drawing is for Westermoskee in Amsterdam in the Netherlands, drawn by Marc and Nada Breitman. The mosque is situated on the bank of the canalized river Schinkel in the Chassébuurt in De Baarsjes in the borough of Amsterdam-West. The building was designed by French traditional architects Marc and Nada Breitman, winners of the 2018 Driehaus Prize and part of the New Classical movement. Construction started in 2013 and the building was completed in 2015. The mosque was unofficially opened on 1 April 2016. With a floor surface of 800 m² and a capacity of 1700 people, it is the largest mosque in the Netherlands.