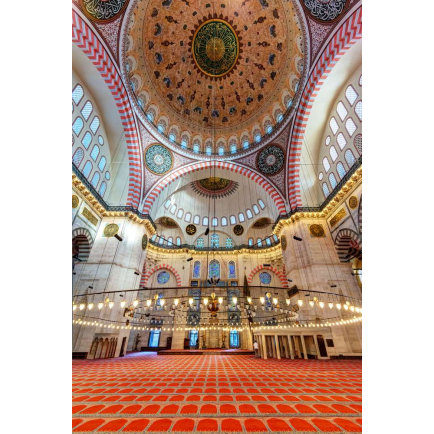 Some of the most prominent features of the Istanbul skyline are the towering dome and minarets of the Suleymaniye Mosque complex, which stands on an artificial platform overlooking the Bosporus. Built by the Ottoman emperor Suleyman the Magnificent between 1550 and 1557 at the height of the Ottoman Empire’s power, it is the largest and arguably the most beautiful of the imperial mosque complexes in Istanbul. The interior of the mosque is a single square-shaped room, illuminated by more than 100 large windows, many of which are stained glass. The ornamentation is simple and does not distract from the imposing size of the central dome, which measures 90 feet (27.5 meters) in diameter. Arranged around the mosque itself are a hospital, several religious schools, a row of shops, a mausoleum, and a bath. The complex was designed by the Ottoman master architect Sinan, whose buildings were critical to the establishment of a distinctly Ottoman style of architecture, and it is considered one of his masterpieces. Both Sinan and Suleyman are buried in the complex.