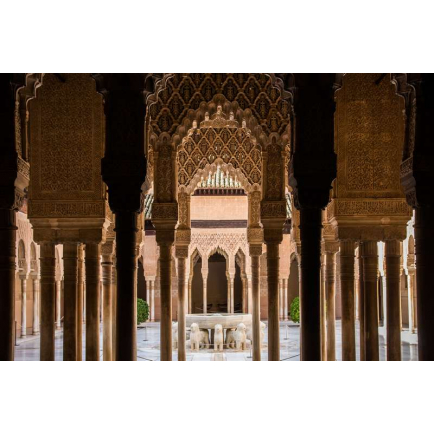 On a hill overlooking the Spanish city of Granada stands the Alhambra, a palace built by princes belonging to the Muslim Nasrid dynasty (1238–1492) in the 14th century. Although some portions of the palace have been demolished, three parts remain: a fortress (Alcazaba, or al-Qasbah) on the west end of the hill, a princely residence to the east, and a cluster of pavilions and gardens known as the Generalife. The courtyards and rooms of the Alhambra are exquisitely decorated with colored tiles, carved stucco, carved wood, and calligraphy. Some of the most remarkable ornamental features are the intricately carved geometric stalactite designs (a recurring pattern in Islamic architecture called muqarnas in Arabic) that adorn the halls surrounding the Court of the Lions.