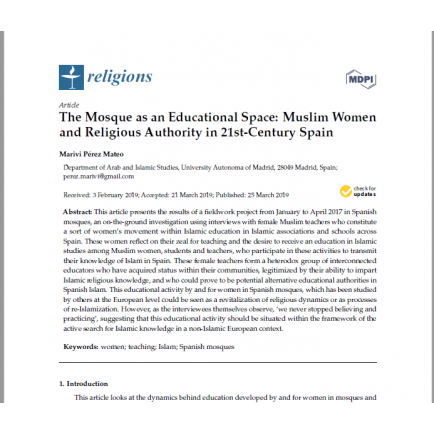 The Mosque as an Educational Space: Muslim Women and Religious Authority in 21st-Century Spain

This article presents the results of a fieldwork project from January to April 2017 in Spanish mosques, an on-the-ground investigation using interviews with female Muslim teachers who constitute a sort of women’s movement within Islamic education in Islamic associations and schools across Spain. These women reflect on their zeal for teaching and the desire to receive an education in Islamic studies among Muslim women, students and teachers, who participate in these activities to transmit their knowledge of Islam in Spain. These female teachers form a heterodox group of interconnected educators who have acquired status within their communities, legitimized by their ability to impart Islamic religious knowledge, and who could prove to be potential alternative educational authorities in Spanish Islam. This educational activity by and for women in Spanish mosques, which has been studied by others at the European level could be seen as a revitalization of religious dynamics or as processes of re-Islamization. However, as the interviewees themselves observe, ‘we never stopped believing and practicing’, suggesting that this educational activity should be situated within the framework of the active search for Islamic knowledge in a non-Islamic European context