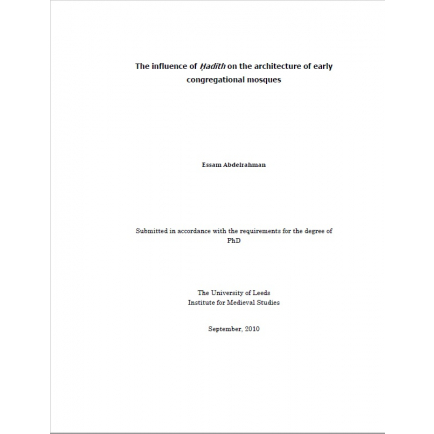 The influence of Ḥadīth on the architecture of early congregational mosques

This study weighs up the influence of Ḥadīth, „Traditions of Prophet Muḥammad‟, on the architecture of the major congregational mosques which were built from the rise of Islam in 1/622 to the end of the Umayyad period in 132/750.

The thesis is divided into eight chapters. The first is an introduction which deals with: the reasons behind underestimating the role of Ḥadīth in shaping mosque architecture, the main questions of the study, and the approaches and methodologies applied to deal with these questions. The second chapter discusses the historiographical problems of Ḥadīth and early Arabo-Islamic sources. The third examines the nature and functions of the sizable hypaethral building which was erected by the Prophet and which we believe was a mosque and not simply an abode for the Prophet and his family.

The fourth chapter deals with the history and form of this structure, which represents, by definition, an embodiment of Ḥadīth regarding mosques. The fifth chapter, however, asks whether there was an „orthodox‟ form of mosque according to Ḥadīth. It also tries to explore the features of such a form. The sixth and seventh chapters investigate whether and how Ḥadīth influenced the architectural evolution of the mosques which were built under the Rightly-guided Caliphs and those built by the Umayyads, respectively. Chapter eight is an epilogue that summarizes the findings of the study.

The University of Leeds Institute for Medieval Studies