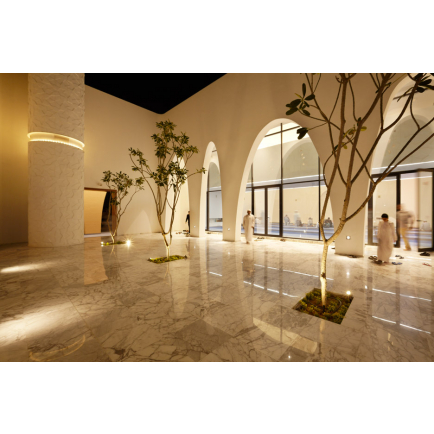 Ibda’s integration of this concept in Al Warqa’a Mosque can be seen in the seamless transition into the space from the outside; with no boundary wall defining the premises of the mosque, worshippers can enter the mosque from three different sides of the riwaq (hallway) surrounding the prayer hall.

This increased accessibility creates an oasis-like effect that emphasizes the notion of the mosque as a communal space. Defining access into the haram (holy space)through the sahn (courtyard) is designed to create a spatial shift that gradually takes worshippers from the busy street environment to the serene space of worship through a series of playful and inviting arches. The sahn also serves the functional purpose of allowing more space for people to pray during Friday prayers or other high traffic seasons such as the holy month of Ramadan and the two Eids