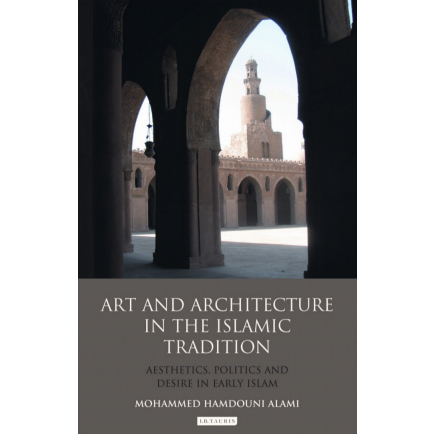 Art and Architecture in the Islamic Tradition: Aesthetics, Politics and Desire in Early Islam

"In the mid-1980s, the rabbi of Rabat, Morocco, having decided to restore the old synagogue of the city, commissioned a local architect to carry out the restoration project and asked him to present his very best ideas. The architect, a young Muslim with little knowledge of traditional Moroccan Jewish customs, was eager to do his best, and prepared a few sketches based on his estimation of what would please the rabbi. When the rabbi was presented with the architectural drawings and their modernist approach, he could not help showing his disappointment, and told the Muslim architect:

My son, the community of the faithful will be disappointed by these bare spaces you are proposing, for we Jewish people, too, love ornament, stucco, plaster, woodwork, and all that. Our people, like yours, like their spaces of worship to be richly decorated. That is how we like our synagogues.

The young Muslim architect who told me this story was taken aback for, like most of his Muslim compatriots, he did not imagine that Moroccan Jews shared with them a taste for architectural ornament. Yet one need simply visit a few traditional Jewish homes in Rabat or Fes to recognize the similarity in taste. Although the existence of this similarity is not, in itself, extraordinary, this anecdote has always had the most amazing effect on my students in Morocco, for there is a strong belief that traditional ornament is Islamic, has an Islamic content, and must therefore be foreign to Jewish, among other, traditions. That belief, in both its overt and covert forms, is in fact very widespread in and outside Morocco, and it seems to me that academic scholarship is partially responsible for this.

This is why I believe that until more conclusive research is conducted we should suspend the use of the term Islamic to qualify the architecture of the Islamic world after the rise of Islam. As the anecdote above suggests, what has been called ‘Islamic architecture’ has little if any religious content. The elaboration of the architectural types at hand appears to have been a complex synthesis of different legacies, and cultural and political statements as well. As Oleg Grabar pointed out, the role of the new faith seems to have been limited to a few features, such as the ban on the representation of living beings in religious buildings, the appearance of the house of the prophet and his pulpit, and the requirements related to the form of the ritual prayer in the organization of the mosque.3 The Qurʾan, which is the original source of Islamic religious knowledge, does not contain any doctrine of the arts. The traditions of the prophet that are related to the ban of images date to the eighth century and are later than the formation of the basic architectural typologies.

Even commemorative structures do not have, against all expectations, any religious basis, as exemplified by the Taj Mahal, the most celebrated among such structures, a monument dedicated by a prince to his beloved deceased wife. As Robert Hillenbrand4 argued, the geographic extension of the Islamic world, the assimilation of different cultures, and the consequent formation of regional styles that are very different from each other (Ottoman, Moghul, Andalusian, Syrian and Iranian) plead against any trans-historical definition of this fundamentally diverse architectural corpus. We should, in fact, consider this diversity in the same way as we view Gothic, Renaissance, Baroque and other architectural legacies of Europe as different forms in European architectural history.

Furthermore, we should keep in mind that the history of the Islamic world bears witness to a constant and reciprocal flux of exchanges and influences with other civilizations. Thus, for instance, Umayyad architecture, albeit the product of an Islamic society, may appear to bear a closer kinship to Byzantine art than to the Safavid architecture of Iran; and the Romanesque architecture of southern France, despite its European character, may appear closer to Moorish art than to Rococo architecture.

It is also well known that the Umayyad Mosque in Damascus has been mistakenly thought of as a converted Byzantine church,5 and that still today some Islamists condemn Umayyad architecture as being Christian in inspiration. I will therefore restrict myself to use the dynastic appellations of the different styles, and following K. A. C. Creswell I will refer to the formative period of the architecture of the Islamic world as that of early Islam, which would include the Umayyad and the ʿAbbasid styles. "