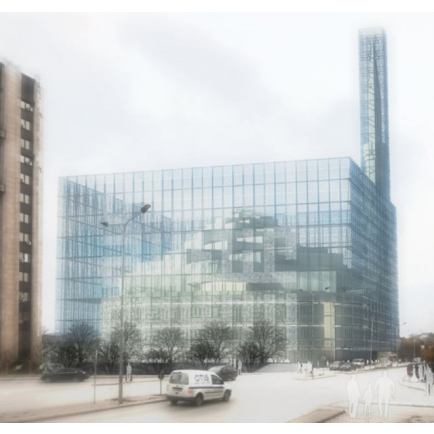 Atelier v’s Entry in the International Design Competition for the Central Mosque of Prishtina, Kosovo

The design solution for The Central Mosque of Prishtina has as its foundation the notion that Prishtina is a bridge between the East and The West. It could not be a entirely eastern mosque because of Prishtina’s various Western influences, nor could it be a structure modeled after the latest Western trends in design as Prishtina has strong roots in Islamic Culture and history, primarily an Eastern phenomenon. The Central Mosque of Prishtina thereby becomes a unique response to a particular culture, society and geography at the macro scale, and its site, district of Dardania, and the city of Prishtina in a more micro scale. It is both grand and monumental, and inviting at a human scale. It is grand and monumental in scale as it relates to Dardania and Prishtina with a minaret height of 83 meters measured from Bulevardi I Deshmoreve.

The main structure in 39 meters high. This height and scale will assure it landmark status I a city dominated mostly by low to mid-rise residential structures. The glass enclosed Minaret will be seen from almost the entire city both during the day and at night when its glass cage is lighted to the sky, reaching for the god and heavens! At a more human scale, the main prayer hall structure is very approachable. It sits singularly, monumentally alone with no other structure touching it. This will allow for free and unrestricted circulation of large masses of people in the open and semi-open Upper Hayat around the hall and into the main entrance directly opposite of the Kiblah. Walking around the main Prayer hall, one can penetrate under the glass cube protecting enclosure to touch the stone faced of the prayer hall with large scale Koranic modern calligraphy adorning it.

The circular motion created around the octagonal shape of the prayer hall, leaves one no choice but to lead to the entry point on the opposite side. The Mens prayer hall has been deliberately sunk one level from the Bulvardi I Deshmoreve level to allow females to enter the mosque’s Mahfil in a more direct way, a progressive gesture in line with today’s Islam and especially Kosovo’s position in the Islamic World. Men descend down a grand stair case into an interior portico and also enter the Men’s Prayer Hall on the lower level directly opposite of the Kiblah Axis. Lower Portico is also directly accessed via the Lower Hayat for those men and women who arrive on foot from the western side of the property. The Site has been planned to step with the terrain from east to west. Lowering the Mens prayer hall one level, has allowed it direct access from the Lower Hayat. Lower hayat which is surrounded by the Library, Class Rooms, Restaurant, Multi-purpose rooms, and the conference hall will be a place of gathering and in times of festivals, it can be used as additional prayer space. This Lower Hayat is marked with and oriented by a Clock Tower a uniquely Albanian feature which doubles as an elevator shaft accessing to parking below and library and Imam’s Apartment above. Again, the concrete Clock Tower is adorned with verses from Koran.

All the important functions of the complex including the main Prayer Hall can be easily accessed from this Lower Hayat. In a way it acts as a social gathering space and an organizer. In the middle of the Lower Hayat is a Fountain which can be used for Ablution during the good weather as well as a skylight to the shops on the level below. The lower Hayat can be accessed from the East (upper Hayat), North and South(Pedestrian path). From the Lower Hayat, the monumental mass of the mosque can be seen leaving no doubt as to its presence and importance! The main Prayer Hall structure is derived from two distinct forces of geometry. One is the direction of the general City Grid and primarily the axis of Bulevardi I Deshmoreve and the other the direction of Kaba.

The form starts out as a square, a significant form within Islamic Architecture, and it turns direction to face Kaba while leaving behind its ghost as a cubic glass enclosure to have a dialogue with the City.Once the square form turns, the limitations of the site clip its corners and turn it into an octagonal form with its main axis facing Kaba. Juxtaposition of the square upon square and its radial movement form the basis of the geometry of the dome of the Main Prayer Hall. The Gaps in this three dimensional juxtaposition, form the openings filled with skylights that fill the main prayer hall with a very high quality of light and shadow.

The main prayer hall floor is approximately 2,580 M2. The Mihrab is a direct result of the geometry of the Prayer Hall, a glass wedge which is clearly identifiable both from interior as well as the exterior of the mosque. This glass wedge descends into the lower Men’s Prayer Hall level with back-lit glass. The interior of the prayer hall, is monumental and mesmerizing. One can look up at the ceiling and se the beautiful patterns of the beamed structure of the dome and pendent lights following the pattern. The walls are adorned with Gold Plated Calligraphy repeating “ In the name of god the merciful and kind” while the floor is a deep red patterned carpet, both signifying the richness of Allah. The Mahfil or Women’s prayer is on the main and second gallery levels. The main level is accessed directly at ground level and the second level is accessible via two elevators and large stairs. These levels look directly on Men’s Prayer and at the Mihrab. On all three levels, the relief calligraphy in certain zones turns into bookshelves for Korans.

The Cubic Glass enclosure around the main Prayer hall has practical, urbanistic and symbolic significance. From a practical point of view, it protects the main structure from severe winds during the winter months, it also, has within its glass panels solar cells that absorb the suns energy and help in the entire structure’s energy program. It also, has Koranic verses on the glass panels which convey different messages from afar (The religion before Allah is Islam) and close up (There is no compulsion in Religion) as symbolic representation of Islamic Identity. Urbanistically, the Glass cube follows the city grid and aligns itself with Bulevardi I Deshmoreve, giving the Mosque its proper place within the city fabric while the structure within turns to Kaba. Symbolically, it’s a gesture toward the Kaba’s cubic structure while protecting the sacred mosque much like a jewel in a jewel box. Additionally, at night, the entire glass cube becomes a digital LED surface glowing and conveying messages at micro and macro scale signifying the acknowledgement of Man’s technological progress in Islam.

The areas around the men’s Prayer hall are clearly segregated to male and female. The Men’s and women’s Ablution , showers and toilets are in a completely separate wings. Women are able to enter these areas directly without mixing with men through stair and elevators from the main level or from the Lower Hayat. Imam’s room is directly behind the Mihrab with a door to the Men’s Prayer Hall giving him direct access. Imam is also provided with an office within the administrative wing along with other accounting and administrative offices. The Conference hall with a capacity of 500 opens directly into the lower Hayat. It also has the ability to be divided into 3 separately functioning rooms.

There are two elevators which directly access the Prayer Hall from the parking and shops below making it convenient to access the main mosque without navigating through other functions. The shops are organized along the southern pedestrian path, the north and western boundaries of the site. Additional shops are provided in the level below the Lower Hayat in a Bazaar format accessed from a western entry and via elevators from the parking below making it more convenient to shop during winter months.

The buildings are designed for low cost of maintenance. All the structures are to be built in Reinforced cast in place smooth finish concrete. The main Prayer hall will be cladded in large stone slab veneer and the dome beams will be cladded in stainless steel panels for low cost of maintenance and long life. The will be zones of landscaping provided in the Upper Hayat and the Lower Hayat with indigenous trees providing shade in the summer months.