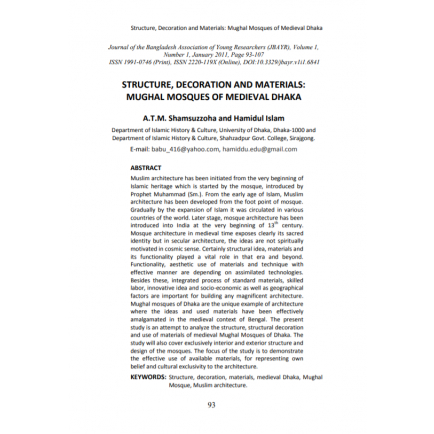 Journal of the Bangladesh Association of Young Researchers

Mosque architecture in medieval time exposes clearly its sacred identity but in secular architecture, the ideas are not spiritually motivated in cosmic sense. Certainly structural idea, materials and its functionality played a vital role in that era and beyond. Functionality, aesthetic use of materials and technique with effective manner are depending on assimilated technologies. Besides these, integrated process of standard materials, skilled labor, innovative idea and socio-economic as well as geographical factors are important for building any magnificent architecture.

Mughal mosques of Dhaka are the unique example of architecture where the ideas and used materials have been effectively amalgamated in the medieval context of Bengal. The present study is an attempt to analyze the structure, structural decoration and use of materials of medieval Mughal Mosques of Dhaka. The study will also cover exclusively interior and exterior structure and design of the mosques. The focus of the study is to demonstrate the effective use of available materials, for representing own belief and cultural exclusivity to the architecture.