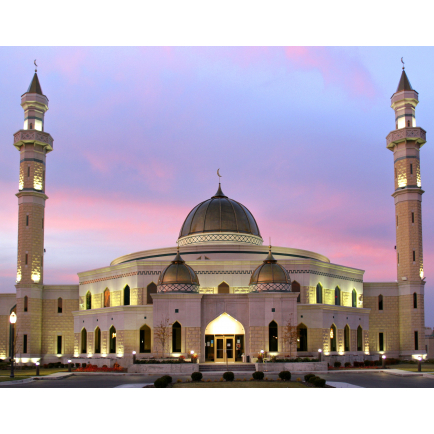 Mosques in the United States

Islam's first mosque, built in Madinah in 622, was a simple rectangular structure constructed of palm logs and adobe bricks. The United States' first purpose-built mosque, completed in Cedar Rapids, Iowa in 1934, was a simple rectangular building of white clapboard on a cinder-block foundation, with a dome over the front door. In the 13 centuries that separate those buildings, mosque design has evolved differently in the different countries and cultures where Muslims live, and in the US too the thematic and visual characteristics of mosque architecture had to deal with a new environment--one that had its own pre-existing historical and visual vocabulary.

Of nearly, 1000 mosques and Islamic centers in the United States surveyed in the mid-1990's, fewer than 100 had originally been designed to be mosques and, of those, the older ones had not been designed by architects. Many of these simple buildings were meant to used as cultural or community centers--for example, the Albanian Cultural Center, the Arab Banner Society, the Indian/Pakistani Muslim Association--and not exclusively as mosques. They had a room for prayer, but--like the Cedar Rapids mosques--they also served as clubs, with a social hall for weddings and parties and a basement for bingo games.

No longer, American mosques built in the last few decades, in the period in which Islam has begun to feel at home in the United States, are almost universally architect-designed. And despite stylistic features that vary considerably, especially among the more elaborate mosques, all of them fall into one of three basic categories. First, there are those mosques that embody a traditional design transplanted entire from one--or several--Islamic lands. Examples are the Islamic Cultural Center in Washington, D.C.(built in 1957); the Islamic Center of Greater Toledo, Ohio (1983), and the Islamic Center of West Virginia in South Charleston (1989).

Second, there are those that represent a reinterpretation of tradition, sometimes combined with elements of American architecture. examples are the Islamic Cultural Center in New York City (1991) and Dar al-Islam in Abiquiu, New Mexico (1981).

As in the older mosques, most of the buildings in all these categories are not exclusively places of worship, but function rather as Islamic centers, with such facilities as classrooms, library, conference center, bookshop, kitchen and social hall, as well as recreational facilities, residential apartments, and in some cases even as funeral home.