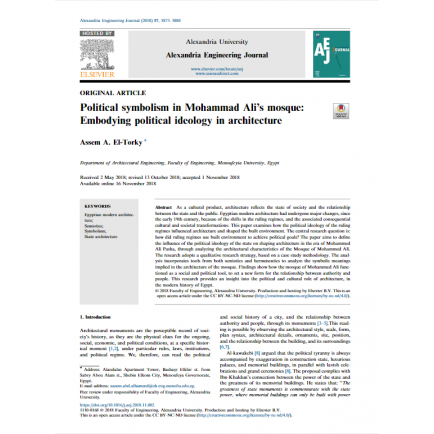 As a cultural product, architecture reflects the state of society and the relationship between the state and the public. Egyptian modern architecture had undergone major changes, since the early 19th century, because of the shifts in the ruling regimes, and the associated consequential cultural and societal transformations.

This paper examines how the political ideology of the ruling regimes influenced architecture and shaped the built environment. The central research question is: how did ruling regimes use built environment to achieve political goals? The paper aims to define the influence of the political ideology of the state on shaping architecture in the era of Mohammed Ali Pasha, through analyzing the architectural characteristics of the Mosque of Mohammed Ali.

The research adopts a qualitative research strategy, based on a case study methodology. The analysis incorporates tools from both semiotics and hermeneutics to analyze the symbolic meanings implied in the architecture of the mosque. Findings show how the mosque of Mohammed Ali functioned as a social and political tool, to set a new form for the relationship between authority and people. This research provides an insight into the political and cultural role of architecture, in the modern history of Egypt.