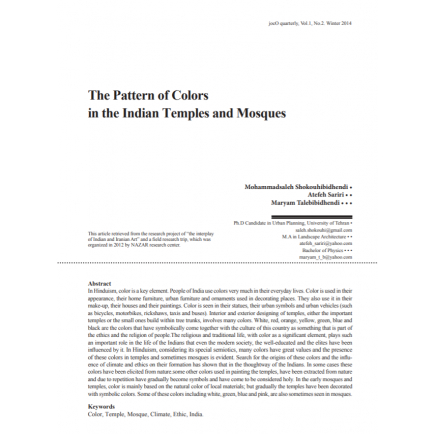 The Pattern of Colors in the Indian Temples and Mosques

In Hinduism, color is a key element. People of India use colors very much in their everyday lives. Color is used in their appearance, their home furniture, urban furniture and ornaments used in decorating places. They also use it in their make-up, their houses and their paintings. Color is seen in their statues, their urban symbols and urban vehicles (such as bicycles, motorbikes, rickshaws, taxis and buses).

Interior and exterior designing of temples, either the important temples or the small ones build within tree trunks, involves many colors. White, red, orange, yellow, green, blue and black are the colors that have symbolically come together with the culture of this country as something that is part of the ethics and the religion of people.

The religious and traditional life, with color as a significant element, plays such an important role in the life of the Indians that even the modern society, the well-educated and the elites have been influenced by it. In Hinduism, considering its special semiotics, many colors have great values and the presence of these colors in temples and sometimes mosques is evident.

In the early mosques and temples, color is mainly based on the natural color of local materials; but gradually the temples have been decorated with symbolic colors. Some of these colors including white, green, blue and pink, are also sometimes seen in mosques.