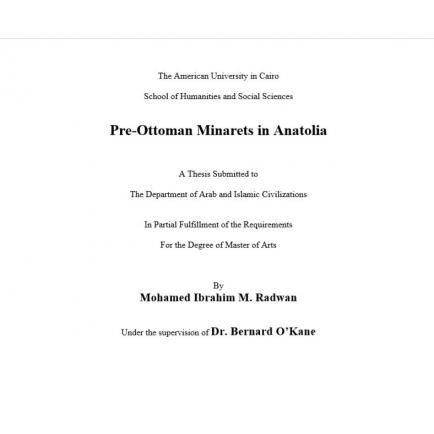 It is very difficult to find nowadays a masjid in any of the main Islamic cities, such as Cairo, Istanbul or Baghdad, without a minaret or more flanking any of it’s corners. This is a clear indication of how important this element is in Islamic architecture and may be a good reflection of the symbolic and functional role it played. Studying the origins and different forms of the pre-Ottoman minaret can shed some light on one of the most important aspects of the Islamic architecture in Anatolia and the development of the minaret in the Islamic world. The form of the Anatolian minaret changed through time and was affected by the various styles preexisted in, or imported to, Anatolia like the Armenian, the Syrian, the Seljuk and the Ilkhanid styles. The form of the Anatolian minaret was also influenced by the different historical periods in the region, with three main pre- Ottoman periods that affected Turkish architecture in Anatolia; the Great Seljuk (Persian) period, the Seljuk Anatolian (Rumi) period and the Beylik period. In the early period, monuments were scattered in the areas close to the southern borders in cities like Harran, Urfa, Siirt, Diarbakir and up to Konya, that later became the capital of the Seljuk Anatolian state and where many of the key monuments of that period were built, beside those in Erzurum and Silvan. Although the Anatolian Seljuk state was collapsing towards the end of the 13th Century, Seljuk architecture continued without being really affected. It kept almost the same forms and methods of decoration, but now under new flags especially after the proclaiming of independent states, or what is known as the Anatolian Beyliks, scattered all over Anatolia with important key monuments like those located in Birgi, Antalya, Nigde and Sivas.

In this thesis, an analytical catalog of Anatolian key minarets will be provided and for each minaret in this section, the location will be stated, with a discussion of the historical background of the structure and a description of the shape and form of different elements of the minaret and any characteristic features related to it. This will definitely lead to a better understanding of the development of Anatolian pre-Ottoman minarets and how this foreshadowed the later Ottoman examples.