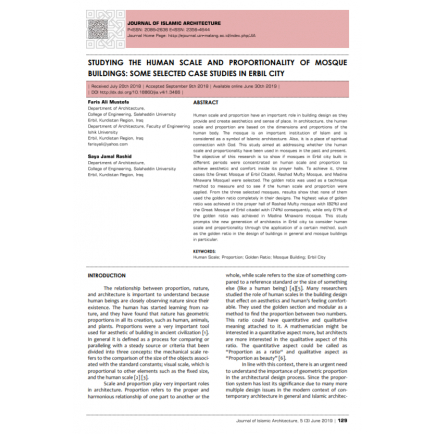 Studying The Human Scale and Proportionality of Mosque Buildings: Some Selected Case Studies in Erbil City

The objective of this research is to show if mosques in Erbil city built in different periods were concentrated on human scale and proportion to achieve aesthetic and comfort inside its prayer halls. To achieve it, three cases (the Great Mosque of Erbil Citadel, Rashad Mufty Mosque, and Madina Mnawara Mosque) were selected. The golden ratio was used as a technique method to measure and to see if the human scale and proportion were applied.

This study prompts the new generation of architects in Erbil city to consider human scale and proportionality through the application of a certain method, such as the golden ratio in the design of buildings in general and mosque buildings in particular.