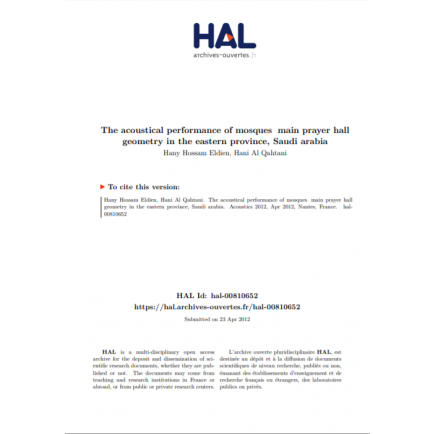 The study of mosque acoustics, with regard to acoustical characteristics, sound quality for speech intelligibility, and other applicable acoustic criteria, has been largely neglected. In this study we discuss how mosque design is influenced by worship considerations.

In this study the acoustical characteristics of typically constructed contemporary mosques without domes in Saudi Arabia had been investigated. Extensive field measurements had been taken in varies representative mosques of different forms and architectural features in order to characterize their acoustical quality and to identify the impact of its prayer hall form on their acoustics performance.

Objective room-acoustic indicators such as reverberation time (RT) and the early decay time (EDT) have been tested. The speech transmission index (STI) had been measured without the operation of existing sound reinforcement systems. The results will show the acoustical quality in the investigated mosques, unoccupied case.