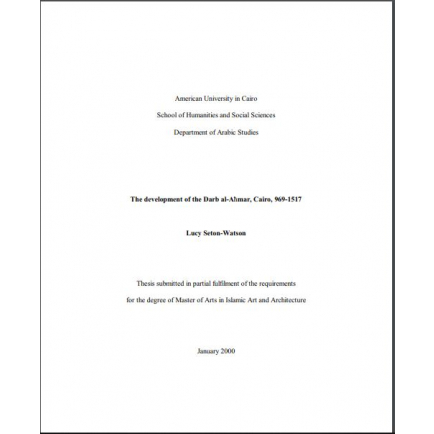 This is a study of the formation of a Mamluk street. The street in question is that leading first east and then south from the Bâb Zuwayla, the great southern gate of Fatimid al-Qâhira. Its initial stretches were known both today and in Mamluk times as the Darb al-A£mar, though most of it is not known by that name, but as the Tabbâna and as Bâb al-Wazîr Street.

The street had no reason to exist before the erection of the Citadel outside the Fatimid city, and one of the aims of this study was to establish as nearly as possible the chronology of what was built where on the street as it took shape. Another was to see how, as the street came into being, the buildings by which we reconstruct it interacted with the street and with its communities. The study also, of course, documents what went on in the buildings studied. These buildings comprise all the monuments that have survived, and some seventeen that are lost, but described in the sources.

The project was based primarily on a systematic study of Maqrîzî's KhiÝaÝ; Maqrîzî's Sulûk, Ibn Iyâs's Badâ’i‘ al-zuhûr and Ibn Taghrîbirdî’s Nujûm were also consulted. Chapter one presents Maqrîzî's account of the development of the area south and south-east of alQâhira, in order to understand the beginnings of the street. Chapter two presents a detailed survey of all documented institutions or monuments on the street, starting from the Bâb Zuwayla end. As much as I could find on the patron and each monument's foundation is presented, and the functions and the main features of the plan for the building are documented. The ways in which the building impacted on the street, both in terms of the street plan and, in three dimensions rather than two, on the landscape and the society of the street are also analysed. Chapter three analyses the findings of chapter two, and presents conclusions about (1) the chronology and the dynamic of development, (2) patrons and functions on the street, and (3) the important issue of how far this street had an official ceremonial and/or folk, popular role and identity in the Mamluk period.

The study follows in a long tradition of topographical studies of Mamluk Cairo conducted at AUC. The Darb al-A£mar area, however, has not been studied before.

A question the study was intended to answer from the first was whether the Darb alA£mar street really was an artery of the Mamluk city. My research has shown that it was not altogether that, and that it was always subsidiary to the southern main street, and certainly also subsidiary in monumental terms to the Saliba Street. It is however a fascinating street, and it shows us vividly how by the fifteenth century the disjointed parts of the Mamluk city were knitting themselves together to form something of an organic whole.

the deveopment of the darb al- ahmar, cairo.pdf