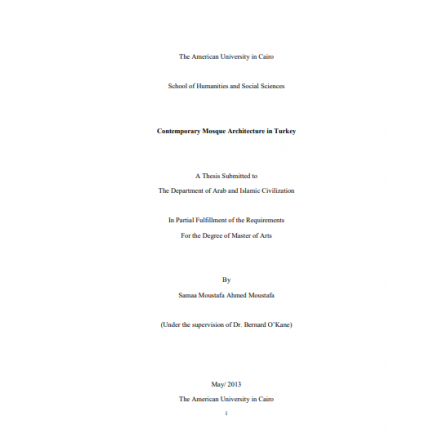 embarked on a massive building project as part of its broader process of modernization.

of the new nation-state, the architecture of the mosque remained conservative with a few

exceptions which started to appear only in the last quarter of the same century. The

Today, the architecture of the contemporary mosque confronts us with stirring debates

between binary opposing perspectives such as modernity versus tradition, nationalism

versus religion and state versus society.

As a case study Turkey has a strong history of nationalism. Its westernization

the twentieth century. There have been two national revivals in its architectural culture.

evident from the ongoing controversies regarding the design, the location and even the

Other than religion, social and architectural cultures are other important areas

where change and transformation as the impact of modernization is greatly manifested.

The new architecture and city planning changed the built environment; the mosque as one

of its many other elements was affected by the change. Furthermore new institutions

Were all these changes expressed in the architecture of modern mosques? What

kind of approach has been taken in the design of modern mosques? What is the role that

mosques? What kind of religious, social and political implications do the new examples

yield? Have the new examples expressed the spirit of Islam since the mosque’s primary

function is a place of worship? Equally important have they expressed the spirit of the

It is within the inseparable political, social, and cultural contexts that this research