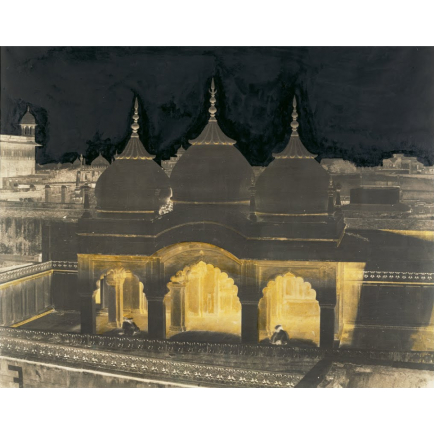 This large waxed-paper negative displays a view of the private mosque built for the Mughal emperor Shah Jahan in the 1630s. Dr. John Murray, who made this negative while working in India, altered it to improve the visual harmony and luminosity of the finished print. He achieved increased contrast by blocking out the sky area with pigment and bleaching the deeply shaded section under the roof to more clearly show the mosque interior.

The waxed-paper process was particularly useful for traveling photographers like Murray because the paper did not require immediate development. It also offered more translucency than other commonly used negatives. The process involved rubbing wax into the paper negative before it was sensitized and exposed. The wax created a smooth surface and reduced the blurring effects of paper fibers. Both the negative and the final print display great clarity of detail, as in the piercings of the surrounding wall and the outlines of distant buildings.