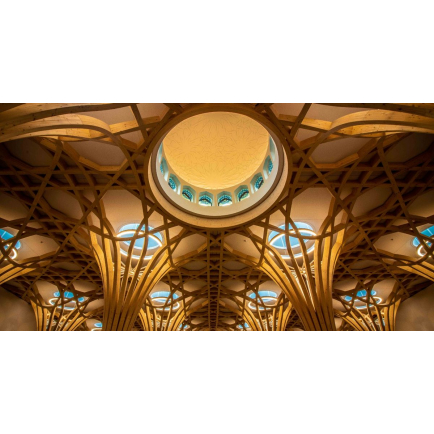 Professor Keith Critchlow, a specialist in Islamic geometry, has advised on the patterns underlying Marks Barfield’s roof structure for the Cambridge Central Mosque and has contributed decorative elements of a more obviously traditional design.

What characterises this building, is the grid of dramatic spruce timber structural columns from portico to prayer hall that rise into flowing, curving, geometric patterns, fanning across the ceiling. Julia Barfield describes how gothic fan vaults, a specifically English invention and exemplified in the nearby 16th century King’s College Chapel, as well as the repetitive arches of the Cordoba mosque, are conceptual references for the unfurling Islamic geometric structure vaulting across the Cambridge mosque ceiling. It is this merging of tradition and modernity, inner and outer, Muslim and non, that lies at the heart of the new mosque.