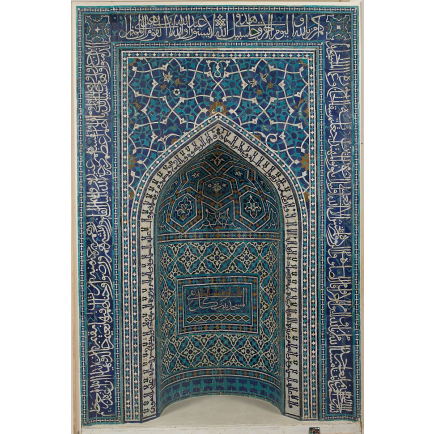 Arabic Inscription (on the outer border in thuluth script):Qur'an 9:18-22Arabic Inscription (framing the niche of the mihrab containing hadith of Prophet Muhammad in kufic script):"Said [the Prophet] (on him be blessing and peace): . . . witness that there is no God save Allah and that Muhammad is his Apostle and the Blessed Imam, and in legal almsgiving, and in the pilgrimage, and in the fast of Ramadan, and he said, on him be blessing and peace."Arabic Inscription (at the center of the niche in thuluth script):"The Prophet (may blessings and peace be upon him) said: The mosque is the abode of every believer."This prayer niche, or mihrab, was originally set into the qibla wall of a theological school in Isfahan, now known as the Madrasa Imami, built just after the collapse of the Ilkhanid dynasty. The mihrab was created by joining a myriad of cut glazed tiles to produce its intricate arabesque and calligraphic designs. The result is one of the earliest and finest examples of mosaic tilework. A splendid work of religious architectural decoration, this mihrab is one of the most significant works in the Museum’s collection.

On view at The Met Fifth Avenue in Gallery 455.