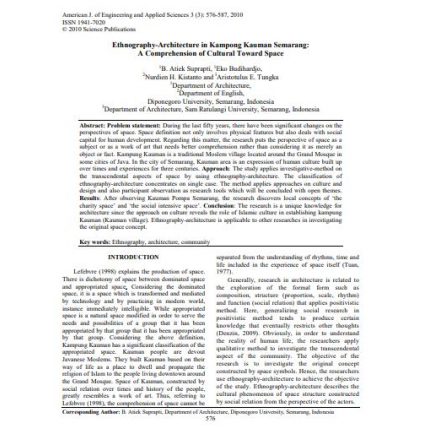 Ethnography-Architecture in Kampong Kauman Semarang: A Comprehension of Cultural Toward Space

During the last fifty years, there have been significant changes on the perspectives of space. Space definition not only involves physical features but also deals with social capital for human development. Regarding this matter, the research puts the perspective of space as a subject or as a work of art that needs better comprehension rather than considering it as merely an object or fact. Kampung Kauman is a traditional Moslem village located around the Grand Mosque in some cities of Java. In the city of Semarang, Kauman area is an expression of human culture built up over times and experiences for three centuries. Approach: The study applies investigative-method on the transcendental aspects of space by using ethnography-architecture. The classification of ethnography-architecture concentrates on single case. The method applies approaches on culture and design and also participant observation as research tools which will be concluded with open themes. Results: After observing Kauman Pompa Semarang, the research discovers local concepts of ‘the charity space’ and ‘the social intensive space’. Conclusion: The research is a unique knowledge for architecture since the approach on culture reveals the role of Islamic culture in establishing kampung Kauman (Kauman village). Ethnography-architecture is applicable to other researches in investigating the original space concept.