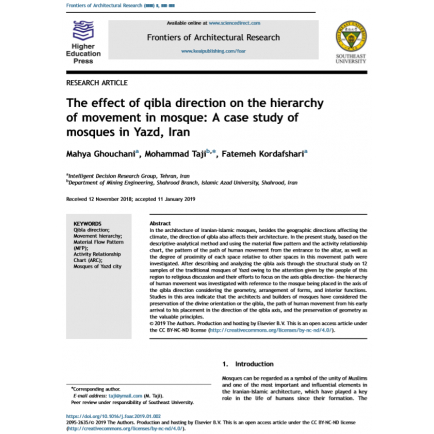 The effect of qibla direction on the hierarchy of movement in mosque: A case study of mosques in Yazd, Iran

In the architecture of Iranian-Islamic mosques, besides the geographic directions affecting the climate, the direction of qibla also affects their architecture. In the present study, based on the descriptive-analytical method and using the material flow pattern and the activity relationship chart, the pattern of the path of human movement from the entrance to the altar, as well as the degree of proximity of each space relative to other spaces in this movement path were investigated.

After describing and analyzing the qibla axis through the structural study on 12 samples of the traditional mosques of Yazd owing to the attention given by the people of this region to religious discussion and their efforts to focus on the axis qibla direction- the hierarchy of human movement was investigated with reference to the mosque being placed in the axis of the qibla direction considering the geometry, arrangement of forms, and interior functions.

The effect of qibla direction on the hierarchy.pdf