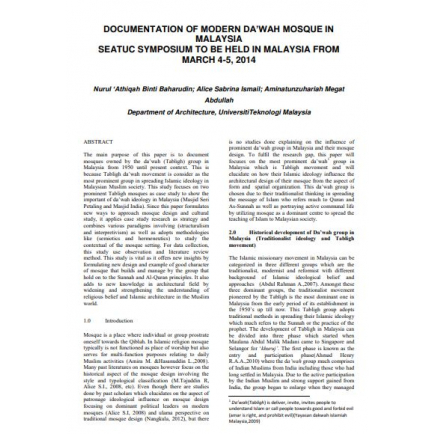 The main purpose of this paper is to document mosques owned by the da’wah (Tabligh) group in Malaysia from 1950 until present context. This is because Tabligh da’wah movement is consider as the most prominent group in spreading Islamic ideology in Malaysian Muslim society. This study focuses on two prominent Tabligh mosques as case study to show the important of da’wah ideology in Malaysia (Masjid Seri Petaling and Masjid India). Since this paper formulates new ways to approach mosque design and cultural study, it applies case study research as strategy and combines various paradigms involving (structuralism and interpretivism) as well as adopts methodologies like (semiotics and hermeneutics) to study the contextual of the mosque setting. For data collection, this study use observation and literature review method. This study is vital as it offers new insights by formulating new design and example of good character of mosque that builds and manage by the group that hold on to the Sunnah and Al-Quran principles. It also adds to new knowledge in architectural field by widening and strengthening the understanding of religious belief and Islamic architecture in the Muslim world.