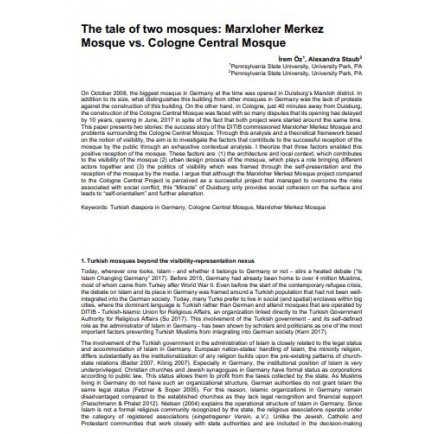 On October 2008, the biggest mosque in Germany at the time was opened in Duisburg’s Marxloh district. In addition to its size, what distinguishes this building from other mosques in Germany was the lack of protests against the construction of this building. On the other hand, in Cologne, just 40 minutes away from Duisburg, the construction of the Cologne Central Mosque was faced with so many disputes that its opening has delayed by 10 years, opening in June, 2017 in spite of the fact that both project were started around the same time. This paper presents two stories: the success story of the DITIB commissioned Marxloher Merkez Mosque and problems surrounding the Cologne Central Mosque. Through this analysis and a theoretical framework based on the notion of visibility, the aim is to investigate the factors that contribute to the successful reception of the mosque by the public through an exhaustive contextual analysis. I theorize that three factors enabled this positive reception of the mosque. These factors are: (1) the architecture and local context, which contributes to the visibility of the mosque (2) urban design process of the mosque, which plays a role bringing different actors together and (3) the politics of visibility which was framed through the self-presentation and the reception of the mosque by the media. I argue that although the Marxloher Merkez Mosque project compared to the Cologne Central Project is perceived as a successful project that managed to overcome the risks associated with social conflict, this “Miracle” of Duisburg only provides social cohesion on the surface and leads to “self-orientalism” and further alienation.