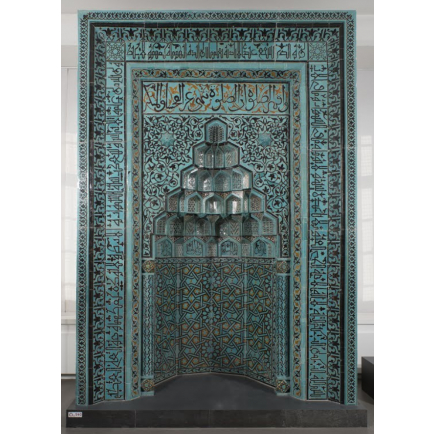 In a mosque a prayer niche (arab. mihrab) usually indicates the direction towards Mecca. This example comes from the Beyhekim Mosque in Konya, endowed by the physician of the Seljuk Sultan Kiliç Arslan IV (d. 1266). In the 13th century faience mosaics were popular in Anatolia and had the function of emphasizing particular building parts, whereby the connection between abstract ornament and religious inscriptions was of great importance.

The niche flanked by half-columns is decorated with an interlace ornament of twelve-pointed stars and pentagons. In the stalactite vault (muqarnas) words of the Prophet Muhammad referring to prayer appear along with geometrical ornaments. The front panel displays a verse of Sura 29. The large trilateral frame is dominated by the throne verse (Sura 2, 255) executed in stylized Kufic. This verse is frequently quoted in religious buildings, particularly in prayer niches, because of its high benedictory value. It also appears in the prayer niche of the palace mosque in Konya, which is generally assumed to be the model for this mihrab.

These faience decorations were created in close cooperation between calligraphers, ornamental painters and craftsmen producing and cutting tiles. Only a highly work-intensive procedure enabled them to produce a complete ornament from countless single parts. Throughout the 13th century in the Seljuk capital of Konya no less than 21 mosques were decorated with faience mosaics.