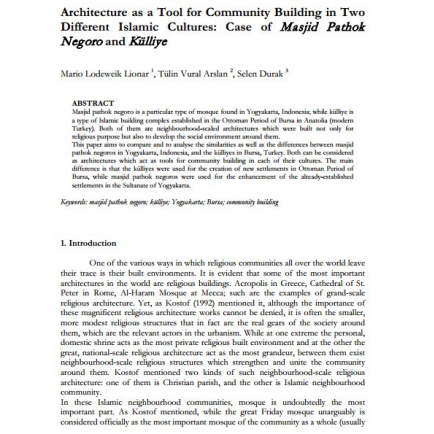 Architecture as a Tool for Community Building in Two Different Islamic Cultures: Case of Masjid Pathok Negoro and Külliye

Masjid pathok negoro is a particular type of mosque found in Yogyakarta, Indonesia; while külliye is a type of Islamic building complex established in the Ottoman Period of Bursa in Anatolia (modern Turkey).  Both  of  them  are  neighbourhood-scaled architectures  which  were  built  not  only  for religious purpose but also to develop the social environment around them. This paper aims to compare and to analyse the similarities as well as the differences between masjid pathok negoros in Yogyakarta, Indonesia, and the külliyes in Bursa, Turkey. Both can be considered as architectures which  act  as  tools  for  community  building  in  each  of  their cultures.  The  main  difference is that the  külliyes  were used for the creation  of  new  settlements in Ottoman Period  of Bursa,  while masjid  pathok  negoros  were  used  for  the  enhancement  of  the already-established settlements in the Sultanate of Yogyakarta.