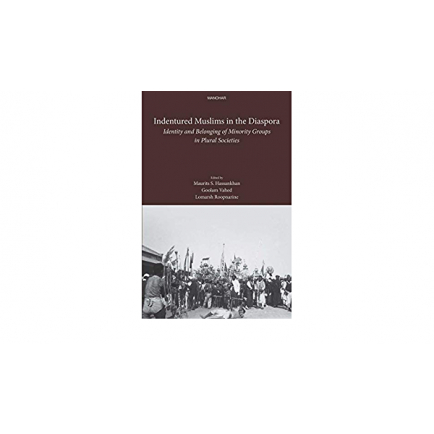 Indentured Muslims in the Diaspora: Identity and Belonging of Minority Groups in Plural Societies

1. Migration, Settlement, and Social Transformation: A Comparative Perspective 2. Islam and Muslims in South Asia in the 19th and 20th centuries: Revolt, Revivalism, and Accommodation 3. Social Transformations among Muslims in Contemporary Mauritius 4. Indian Muslims in South Africa: Historical and Contemporary perspectives, 1860-2015 5. Hindustani Muslims in Guyana – Tradition, Conflict and Change, 1838 to the Present 6. Identity and Acculturation of Trinidad Muslims: An Exploration of Contemporary Practices 7. Hindustani Muslims in Suriname: The Challenges Of Migration and Globalisation 8. The Development of Islam amongst the Javanese in Suriname 9. Islam in Fiji: Continuity, Adaptation and Change during the Indenture and Post-indenture Periods 10. Muharram in Diasporic Settings in the 21st Century

This is the fourth publication originating from the conference Legacy of Slavery and Indentured Labour: Past, Present and Future, which was organised in June 2013 by the Institute of Graduate Studies and Research (IGSR), Anton de Kom University of Suriname. The core of the book is based on a conference panel which focused specifically on the experience of Muslim with indentured migrants and their descendants. This is a significant contribution since the focus of most studies on Indian indenture has been almost exclusively on Hindu religion and culture, even though an estimated seventeen percent of migrants were Muslims. This book thus fills an important gap in the indentured historiography, both to understand that past as well as to make sense of the present, when Muslim identities are undergoing rapid changes in response to both local and global realities. The book includes a chapter on the experiences of Muslim indentured immigrants of Indonesian descent who settled in Suriname.

The core questions in the study are as follows: What role did Islam play in the lives of (Indian) Muslim migrants in their new settings during indenture and in the post-indenture period? How did Islam help migrants adapt and acculturate to their new environment? What have been the similarities and differences in practices, traditions and beliefs between Muslim communities in the different countries and between them and the country of origin? How have Islamic practices and Muslim identities transformed over time? What role does Islam play in the Muslims’ lives in these countries in the contemporary period? In order to respond to these questions, this book examines the historic place of Islam in migrants’ place of origin and provides a series of case studies that focus on the various countries to which the indentured Indians migrated, such as Mauritius, South Africa, Guyana, Trinidad, Suriname and Fiji, to understand the institutionalisation of Islam in these settings and the actual lived experience of Muslims which is culturally and historically specific, bound by the circumstances of individuals’ location in time and space. The chapters in this volume also provide a snapshot of the diversity and similarity of lived Muslim experiences.

293 - Asfaar - Indentured Muslims in the diaspora- identity and belonging of minority groups in plural societies.png