The Dome - Symbol of Power

Selimiye Mosque. A simple definition of a dome is “a hemispherical semi-eliptical roof, built of stone, timber, metal or glass.” From early on in the Middle East and Southwest Asia it was a popular method of roofing in places where there was no timber. It was easy to build using mud bricks that either tilted slightly inwards or by placing layers of brick in circles that gradually became smaller. There have been a suggestion that the circular huts used by nomadic tribes may have had some impact. The Romans adopted the dome, as we see in the Pantheon in Rome, and the Byzantines used the dome to cover their monumental buildings.

Ernst J. Grube, in explicating what he thought Islamic architecture was, wrote the following about the dome: “The dome appears to be a general symbol, signifying power, the royal city, the focal point of assembly; it can therefore serve both religious and secular purposes. Its outward visible appearance does not truly help us to understand, interpret or identify any building.” The earliest domes were placed over the kibla which showed the direction to Mecca and lit this part of the mosque. It later moved to the central position over the prayer hall that it holds today. “The dome is, of course, a cosmic symbol in every religious tradition; and symbolically, in Islam the dome represents the vault of heaven in the same way as the garden prefigures Paradise,” wrote James Dickie in his book “Allah and Eternity: Mosques, Madrasas and Tombs.” 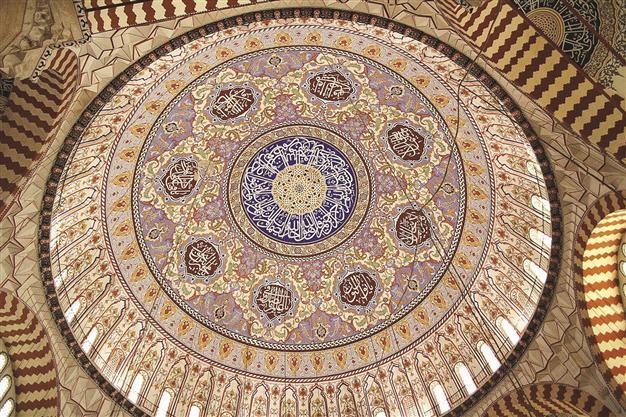 The Arabs built mosques or adapted local religious structures such as churches in the lands they conquered; however, for most of the 7th century, they were satisfied to have flat-roofed structures recreating the flat-roofed mosques of Medina and Mecca. The first domed building constructed by the Arabs was the Dome of the Rock in Jerusalem (691). Since the use of wood in domes had been shown to be very practical in churches, timber was used in the Dome of the Rock. It made the structure lighter and more flexible but had to be covered with copper or lead to protect it from the weather.

The use of small domes in Fatimid mosques in Egypt apparently was adopted from examples in the Maghreb. The dome became the dominant feature for mosques, although it was also used in palaces, in particular over audience chambers, and in other places such as schools, and hamams. Although the earliest mosques in Anatolia date from the 11th century, it isn’t until the 12th century that it became popular to place domes on mosques. The Ulucamis of Niksar and Kayseri and the Alaeddin Mosque in Konya (13th century) have domes. The domes were often in front of the mihrab and in some mosques there were three domes, not just one.