The Great Umayyad Mosque of Aleppo: from Historic Islamic Monument to War Battlefield 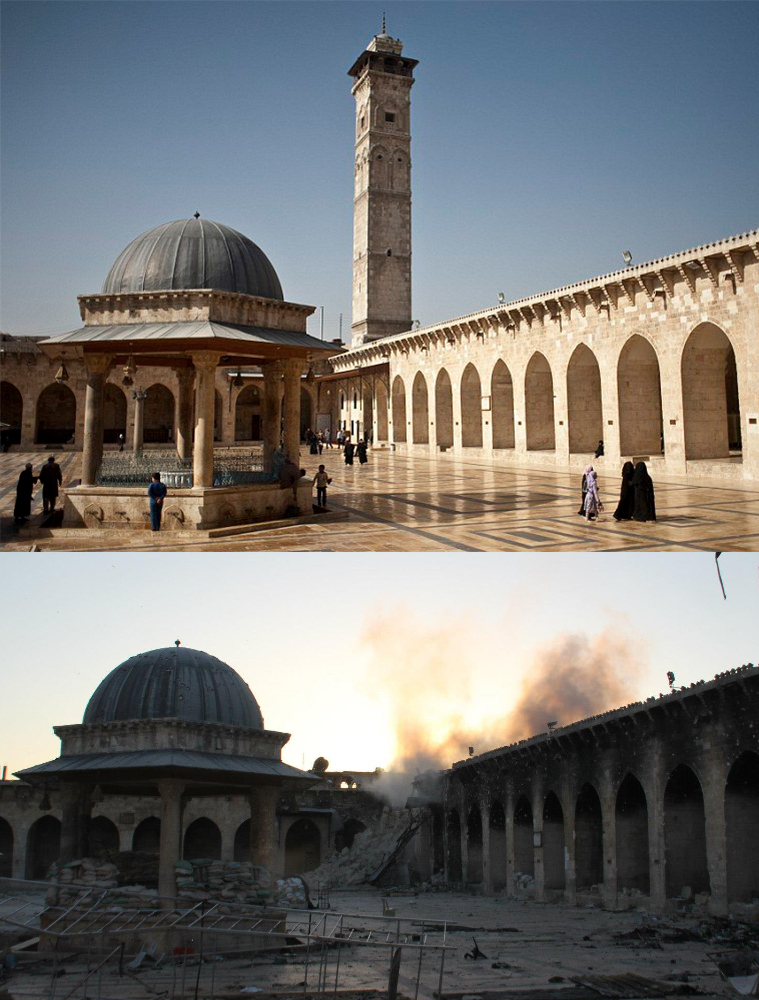 Islam, other than describing a religious belief, is a word that identifies a unique type of architecture that dates back thousands of years. It has been formed by a civilization that transformed the qualities of this belief into visible and tangible material, building structures with a striking focus on details and experiences within enclosed spaces.

Islamic architecture is an architecture that does not change its form easily. In fact, its principles have been more or less the same since thousands of years ago, with minor changes based on functional adaptations. To this day, hundreds of buildings still stand as a representation of the history of Islamic architecture and are still used just as they have been in the past.

War, however, has no religion or cultural nostalgia, and even the holiest, most historically-significant sites are threatened with complete destruction. The Great Umayyad Mosque in Aleppo, originally built by the first imperial Islamic dynasty and currently situated within a UNESCO World Heritage Site, stood yet again as a battlefield during the recent Syrian War, but this time, lost its most significant and resilient element, an 11th-century Seljuk Minaret. 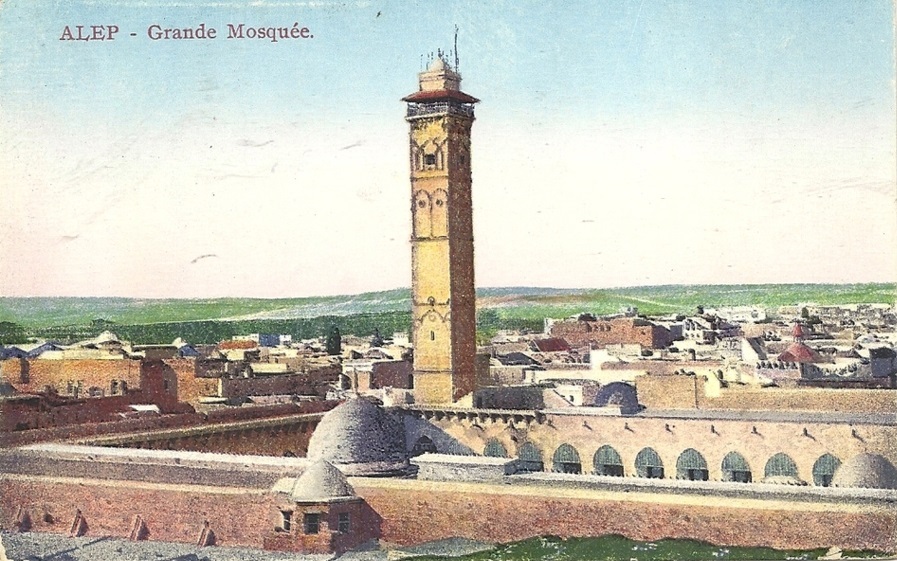 History A decade after the completion of the Great Umayyad Mosque in Damascus (circa 700 AD), Caliph Al-Walid decided to recreate the mosque in Aleppo, but passed away before the work was complete. His brother, Caliph Suleiman, became his successor and followed through with the mosque’s construction, completing it in 717 AD.

Throughout all invasions, the mosque was always the center of the battlefield. The Crusaders, Fatimids, Ayyubids, Mongols, and Mamluks have all took part in destroying the mosque, and rebuilding it afterwards. The first catastrophe to hit the mosque was by the hands of the Abbasids, who vandalized the mosque and stole its ornaments and artwork as revenge against the Umayyads. According to other scholars, the mosaics and ornaments were destroyed by a Byzantine emperor when he occupied the city and burned the mosque to the ground. In 1090 AD, the Seljuks renovated the mosque and built the distinguished minaret*, only for another dynasty to invade the city and destroy the mosque, keeping only the minaret intact. The mosque’s plan was finalized after the plan extension made by Nour Al-Dine Zangi in 1158 AD, the Muslim commander who fought the Cursaders. 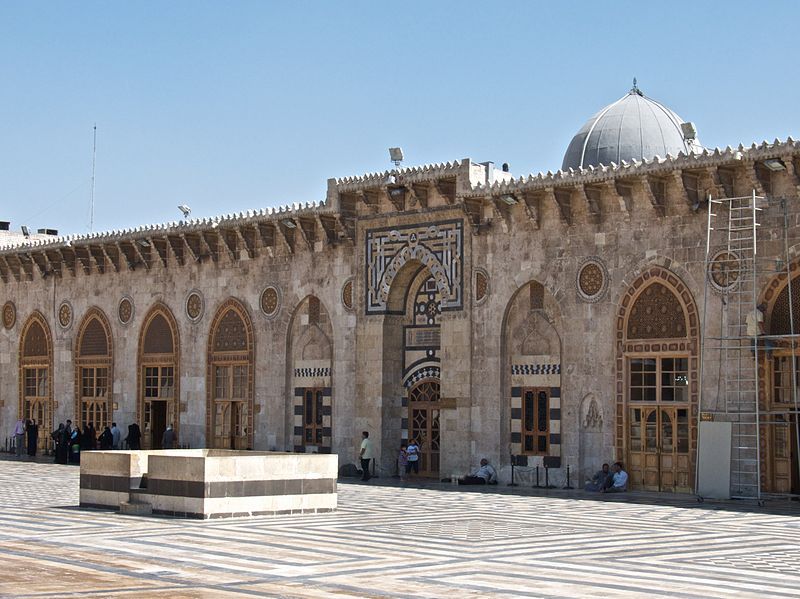 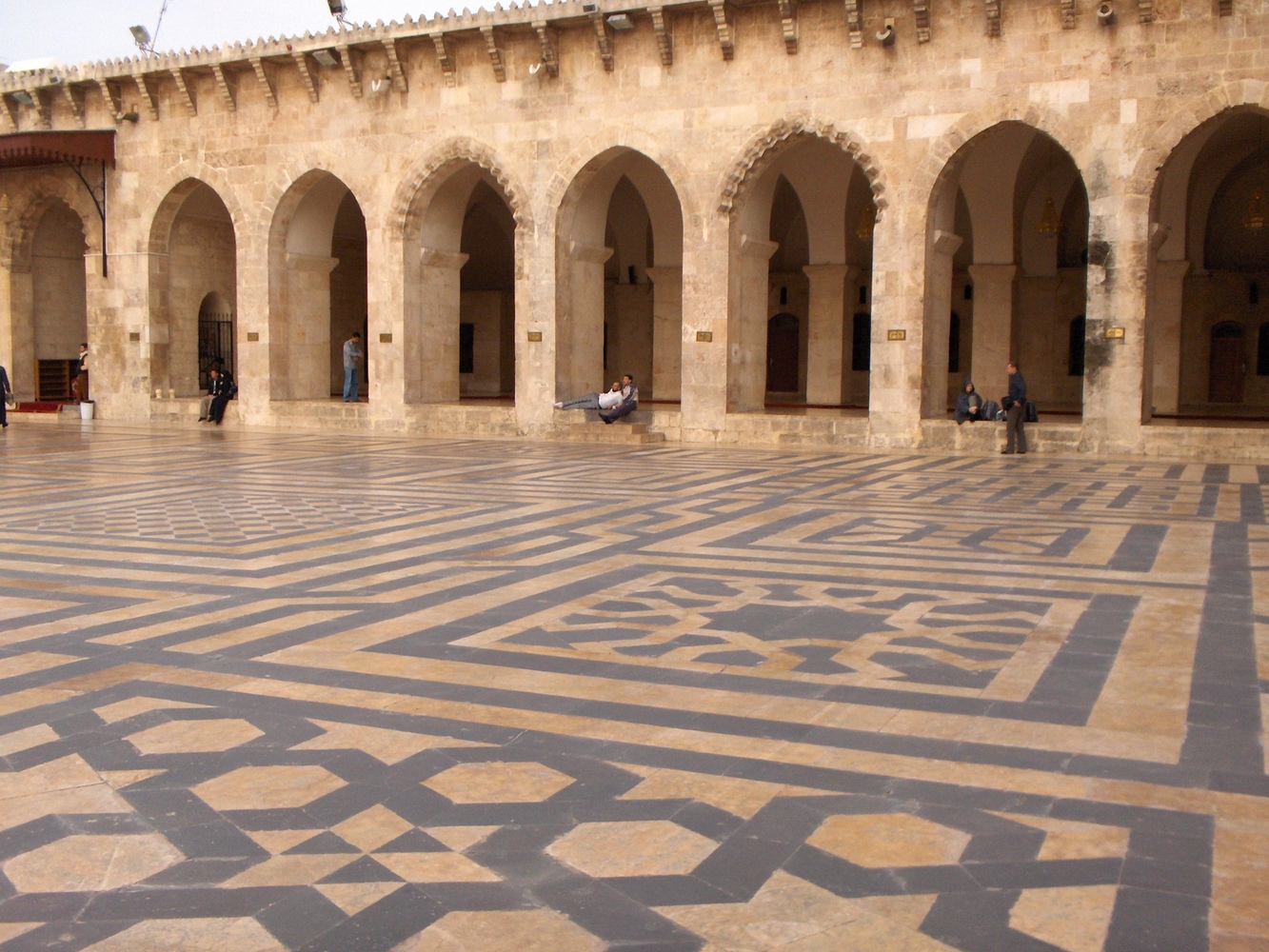 Architecture Regardless of all the structural alterations, the mosque remains an iconic Islamic landmark. The plan’s finalized design (following Zangi’s reconstruction) was arranged in a rectangular 150 x 100 meter hypostyle layout. A large marbled courtyard sits in the middle, with pavilions, fountains, masonry porticoes, and gates, providing access into the mosque from all sides (the eastern gate, however, can provide prayers with direct access to the praying hall). The hall is formed of three large aisles separated by a series of colonnades, all parallel to the Qibla Wall. Within that wall, a yellow-stoned Mihrab is pierced in its center, guiding the visitors to the praying direction. The originally-flat ceiling was replaced with a cross-vault system by Qalawun’s renovations, along with a central dome in front of the Mihrab. Alongside the Mihrab sits an ornamented Maqsurah (enclosed space) which holds the tomb of Prophet Zakariya’s remains. The tomb is draped with a luxurious robe, embroidered with silver-colored Quranic verses. 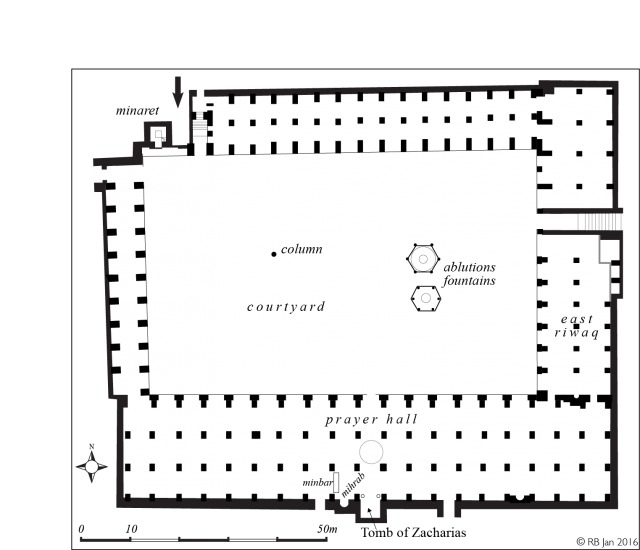 Perhaps the mosque’s most prominent element is the Minaret, which stood on the southern side of the structure since the 11th century. Several historians report that engineers had to dig deep enough to reach the water in order to set the foundations of the minaret. The foundation was strengthened with metal brackets, supporting the 50-meter structure. As for the ornamentation, the minaret was covered with moldings and calligraphic bandeaus of Kufic and Naskhi scripts. 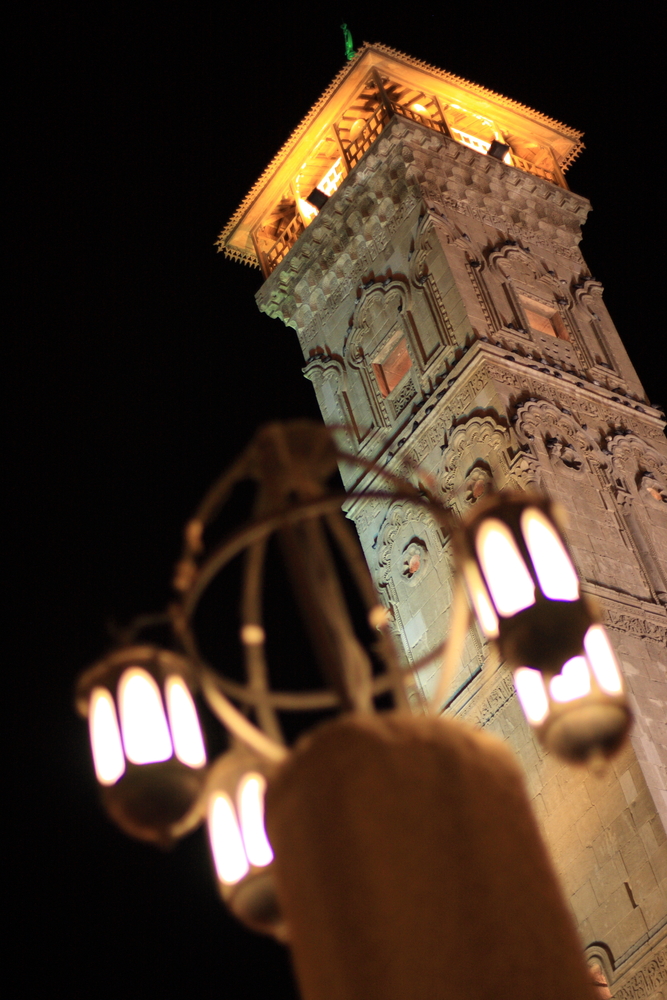 Syrian War  The Mosque’s complex served as a key battleground throughout the war, as fighters against the government’s regime continuously laid siege to the site. Arcades were covered with wreckage, walls were punctured, parts were broken down, ornamentation was stolen, and the Seljuk minaret was eventually bombarded to the ground. Both the government and anti-government activists traded blame for the mosque’s attack. 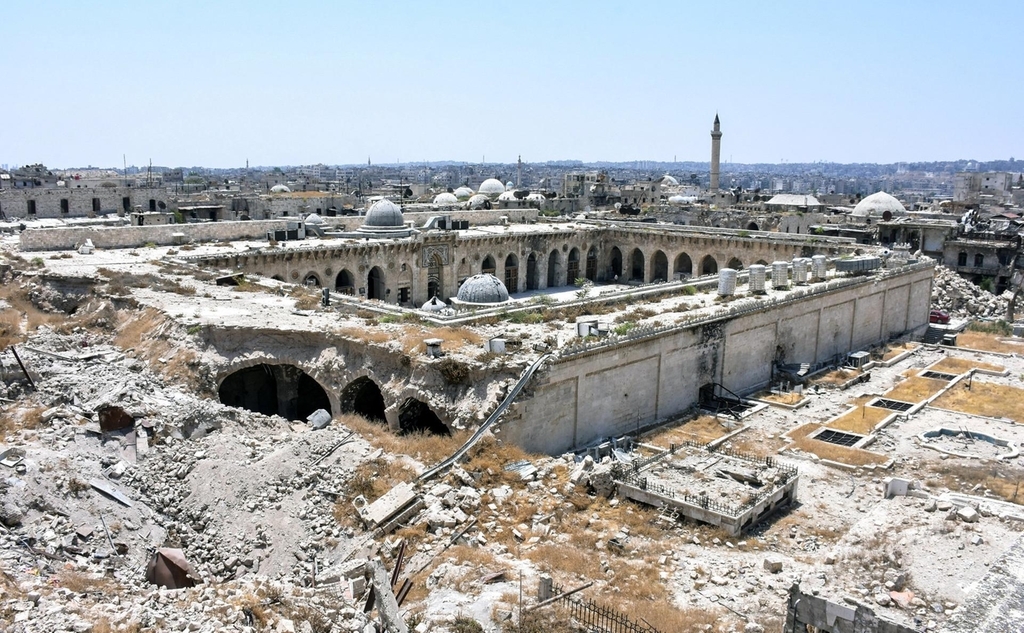 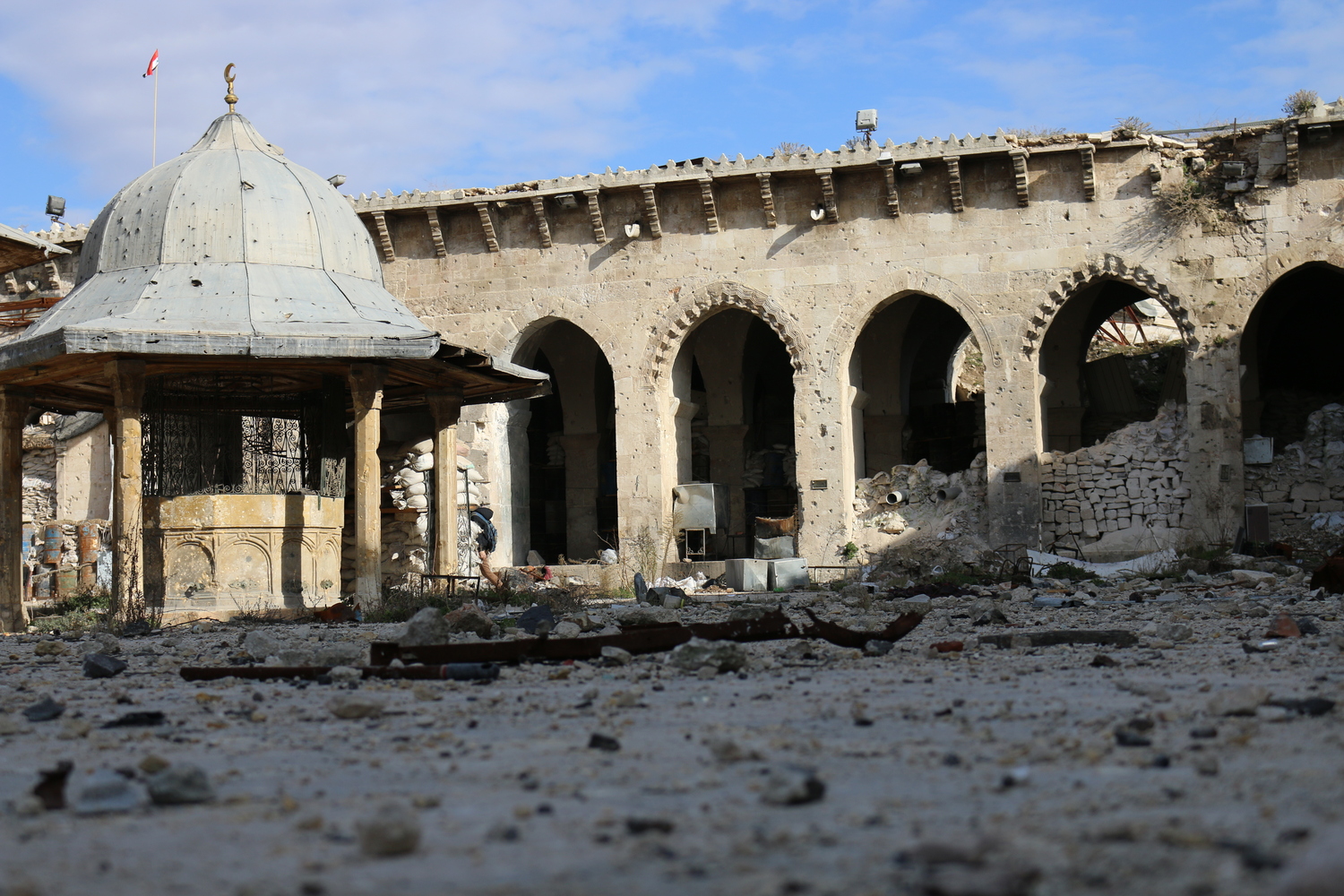 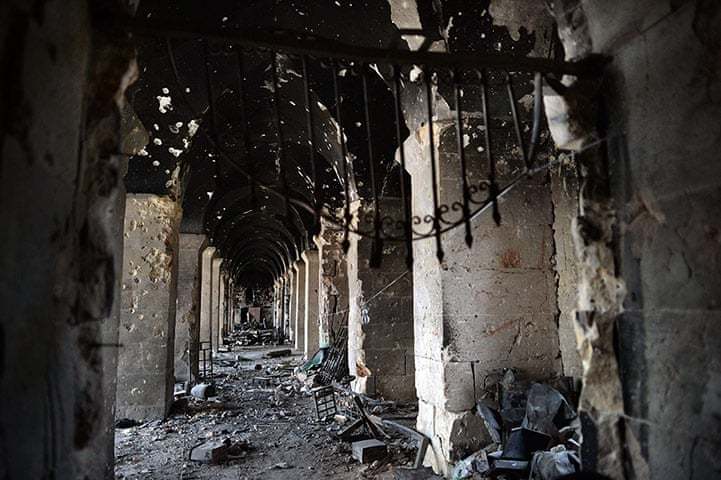 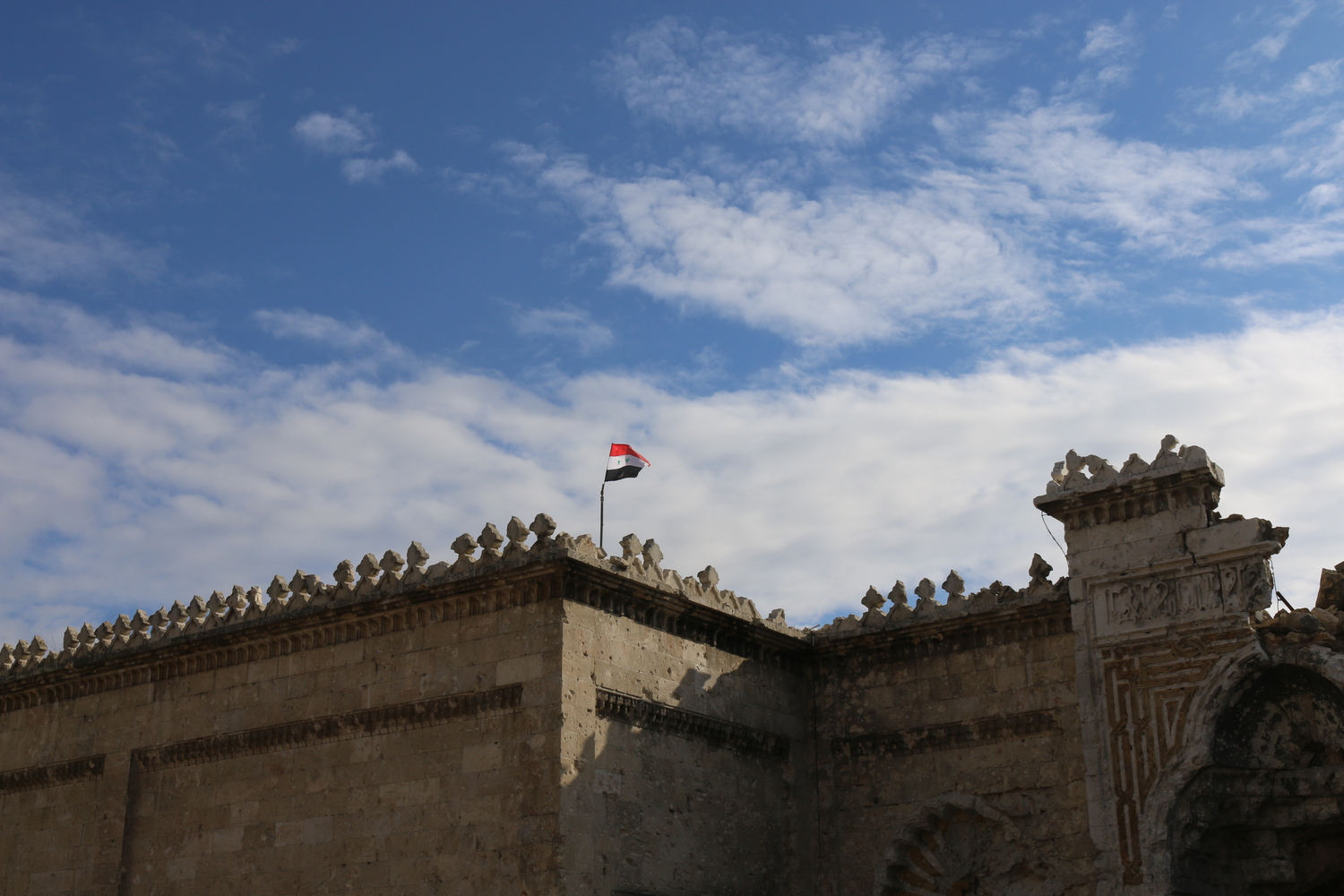 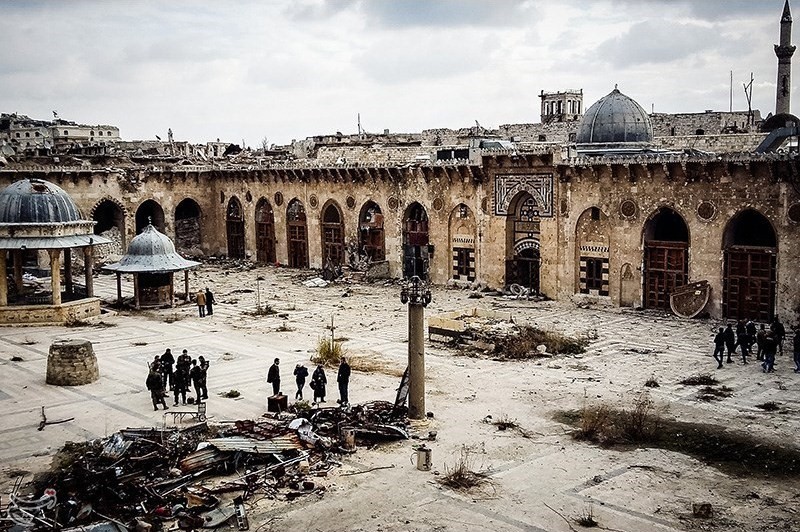 Restoration Similar to most renovation projects, there has been an ongoing debate on whether the mosque should be restored exactly as it was before the war, or completely redesigned with new contemporary interventions. However, the government has not received any redesign proposal yet, so the planned scope of work concentrates on restoring what was damaged only.

The restoration project was assigned to Syrian engineer Misbah Baqi, who has built the Aleppo airport previously and works for Al-Iskan Al-Askari (Military Construction Company). The engineer has already commenced work on this project since 2017 and expects the mosque to be completed within 2-3 years, with plans of new decorative stonework and framework made from local and imported wood. Funding for the mosque’s restoration has reached more than $ 6 million, donated from philanthropists in the Chechen Republic. At the moment, the remaining stones are numbered and laid all over the mosque’s courtyard, while the grand marble sundial, which was used to provide accurate prayer times, has been encased in sandbags then enclosed with breeze-block walls during the war, and is now left on the side, completely overlooked by engineers.

Minaret: A tower built in or adjacent to a mosque which serves as a visual focal point for prayers across the town and a platform for the for the Muslim call to prayer (Adhan).

Qibla Wall: A wall inside a mosque that indicates the praying direction (towards Mecca)

Mihrab / Mehrab: A semi-circular niche on the Qibla Wall.