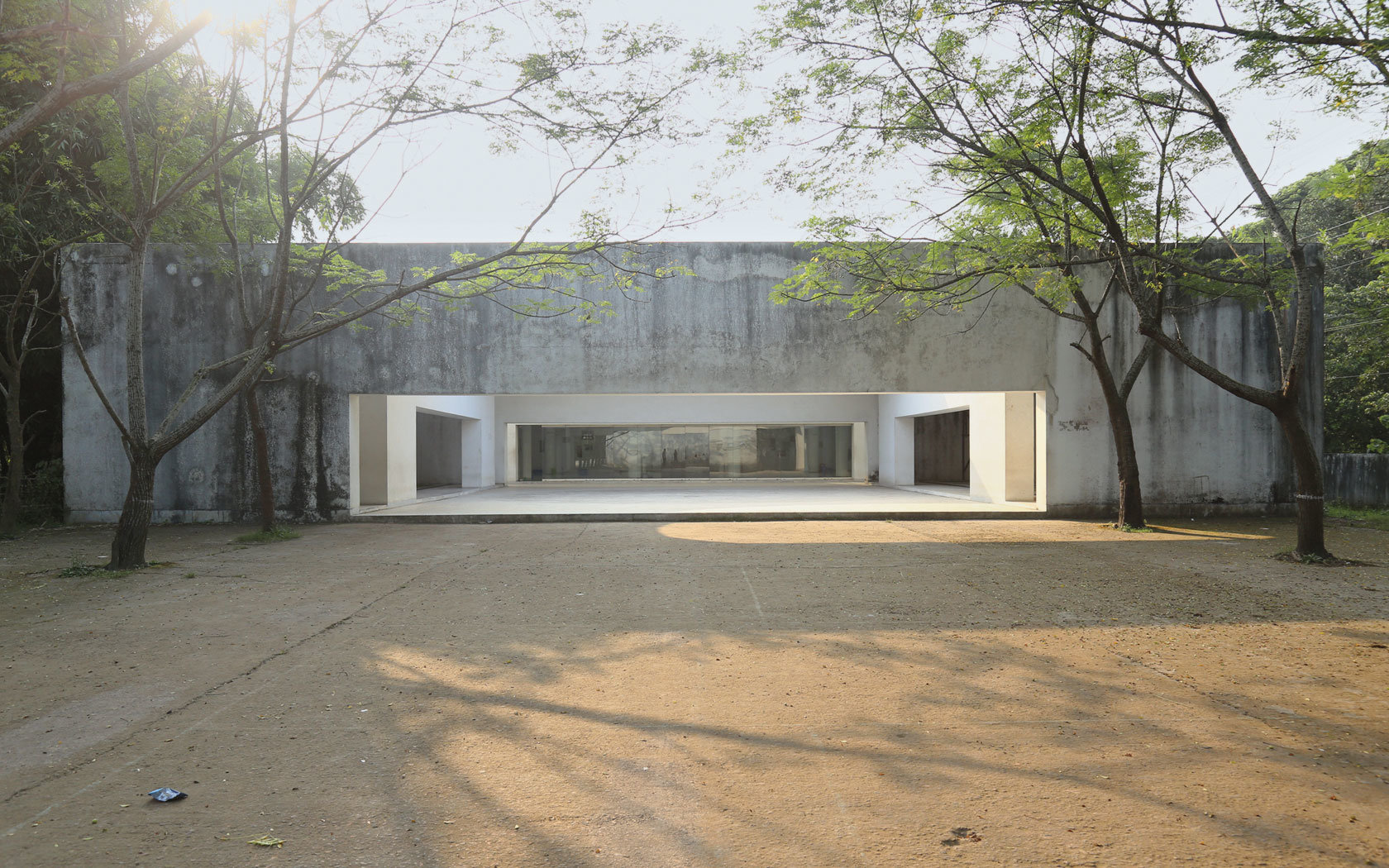 The concrete pavilion of Kashef Mahboob Chowdhury’s Chandgaon mosque (2007) on the outskirts of Chittagong.

The Amber Denim mosque sits at the back of a factory compound deep in the industrial sprawl north of Dhaka, Bangladesh’s frenetic capital (population: more than 18 million). Its walls are a Tetris grid of concrete blocks that recess in tiers toward open centers, like molds for tiny Aztec pyramids. Pipes left over from a plumbing job serve as pillars. Steel struts branch upward toward the 18-foot roof like the skeletons of umbrellas open against a monsoon. On a hot spring morning, the punishing deltaic sun bounces off the shallow moat that surrounds the structure, drifting over the concrete.

The mosque, completed in 2016, was the second project by the seven-year-old Dhaka firm Archeground to be built at the Amber Denim garment factory, which produces reams of fabric for the garment manufacturers that are the engine of Bangladesh’s new economy. A year earlier, the firm had constructed an open-air loom shed of bamboo, concrete and the same repurposed pipes that would be used in the prayer hall: It was an affordable prototype for humane industrial architecture in a nation plagued by deplorable, sometimes fatal working conditions. The loom shed originally contained a small prayer hall at its western end, but the weavers complained that the clacking from the looms disrupted their prayers, and so Jubair Hasan, 39, one of Archeground’s principals, approached the factory’s owner for another patch of land on which they could build a mosque. “We wanted to create a prayer space that would be connected to our climate,” Hasan says. “So there are no windows, no doors. Light comes in from all sides.” Since its completion, Hasan has encouraged the 1,500 employees who work, and in some cases live, on the compound to make their own adjustments by, say, fashioning bamboo curtains to block cold morning air in the winter. “Really, the people are making their own mosque,” he says

Mosques have been at the center of civic life in eastern Bengal, the ancient region surrounding the Ganges-Brahmaputra river delta, since shortly after the Sufi missionaries arrived in the 13th century. Of the 165 million people now living in Bangladesh, a nation roughly the size of Iowa, about 90 percent are Muslim. Aside from the red brick ruins of ancient monasteries, remainders of 400 years of Buddhist rule that ended in the 12th century, the only structures to have survived from antiquity are the austere brick mosques left by the Bengali sultanate (which controlled the region until the 16th century), some Hindu temples and a handful of civic structures built by the Mughals, who ruled the area until the rise of the British East India Company in the 18th century. Otherwise, the vernacular architecture of Bengal, a land of estuaries and mangroves, of shifting soil and torrential storms, largely consists of thatched-roof huts built with mud or bamboo and open-sided pavilions that accommodate, and often succumb to, the extreme climate. 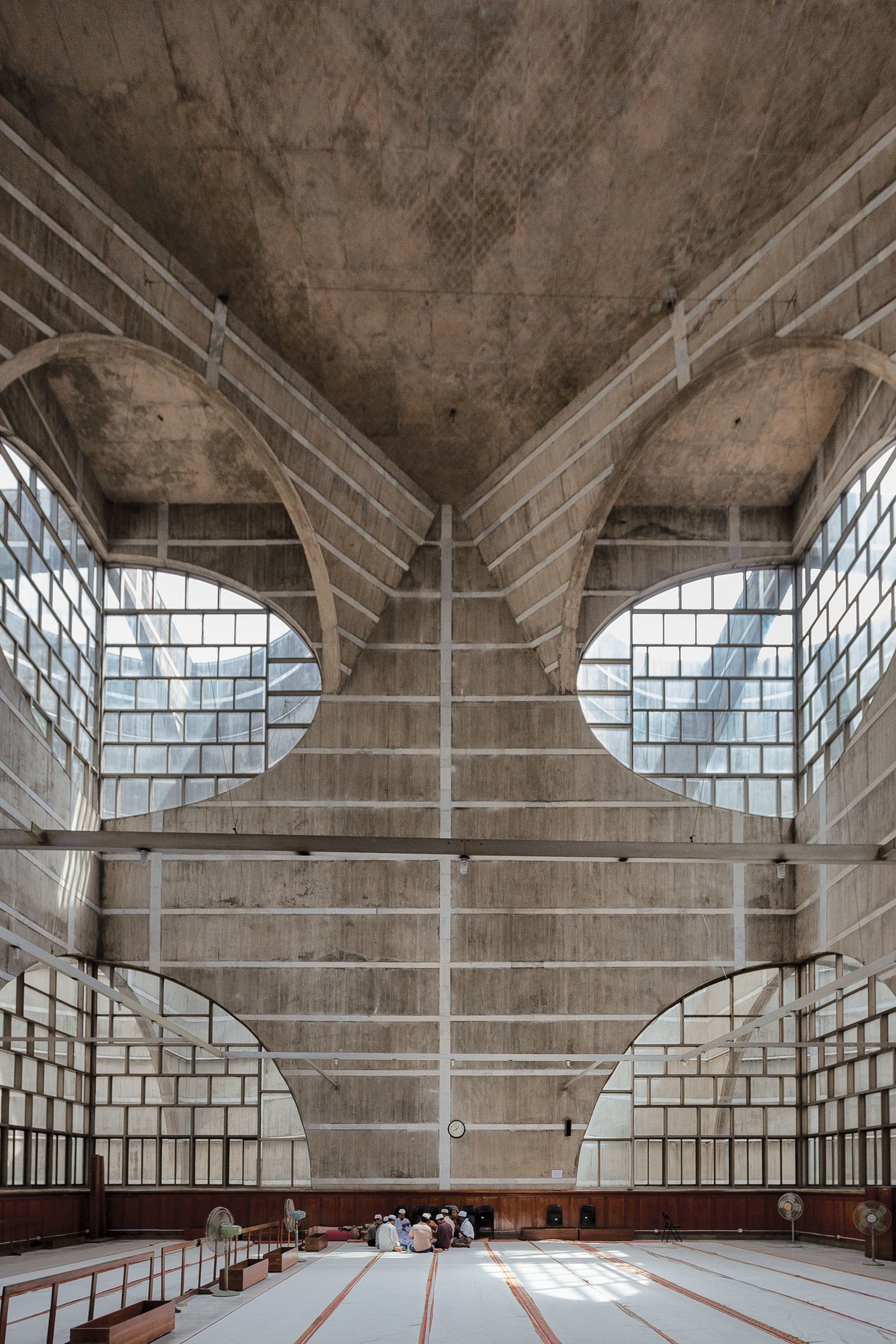 But Bangladesh, as the world knows the country, is a modern invention. When the British relinquished their colonial stranglehold on the subcontinent in 1947, they split it along religious lines: The predominantly Hindu western side of Bengal became a state in India, and the Muslim east became East Pakistan (separated by a thousand miles from West Pakistan). Over the next two decades, a resistance movement emerged in Bengali-speaking East Pakistan as the local population demanded greater representation — and eventually freedom — from the Urdu-speaking political elites in the West. In 1971, after a brief but brutal war, Bangladesh won its independence. In its early years of nationhood, the country had a distinct but austere tradition of mosque architecture to draw on. To set themselves within the framework of a more global Islam, engineers and architects relied on Turkic domes, peaked Mughal arches and massive Arab minarets — the pan-Islamic shorthand for sacred architecture — to indicate the buildings’ importance. These mosques had little to do with Bengal itself.

Beyond these mosques, Bangladesh was rapidly developing the most robust Modernist tradition in all of South Asia. This is largely because of the American-trained architect Muzharul Islam, whose College of Arts and Crafts (now the Faculty of Fine Art at the University of Dhaka), completed in 1955, has remained a touchstone for contemporary Bengali architects. Throughout the 1960s, Islam invited Western luminaries such as the architects Paul Rudolph (Islam’s professor at Yale), Stanley Tigerman and Louis Kahn to study and build in his homeland. Islam and his visitors excavated the traditional, nature-oriented forms that had once defined the region: They used brick (the only long-lasting indigenous material) and concrete to build simple, inexpensive structures that opened themselves to the elements rather than fighting them. Most of these buildings — Robert Boughey’s 1964 Kamalapur Railway Station, Masud Ahmed’s Mausoleum of the Three Leaders, completed in the 1980s — were secular, public spaces. Modernism, Islam hoped, could give physical form to a shared history while shaping a democratic political future. Bengalis will often tell you that theirs is the only nation founded on a language. It might also be the only nation founded on Modernism. And for the last 60 years, that tradition has been passed down through generations of architects, many of whom still describe themselves as “disciples” of Islam (who died in 2012, at the age of 88). The trio of principals at Archeground, Hasan and his 39-year-old partners Lutfullahil Majid and Nabi Newaz Khan, are only its latest inheritors.

Until recently, though, a building like the Amber Denim mosque would have been inconceivable. Modernism was secular; mosques were religious. But this century, as the rapid growth of the textile industry has brought unprecedented wealth to one of the world’s poorest nations, families and businesses have increasingly chosen to channel their new fortunes toward zakat (charity), one of the five pillars of Islam, commissioning public mosques on private land. Raised around a Modernist aesthetic but without the secularist impulse of those who first developed it, these patrons and the architects they hire have brought Modernism and its utopian ideals into the religious sphere at a moment when their nation, like so much of the world, teeters on extremism. The results are some of the most creative, beautiful and radically designed religious spaces being built today 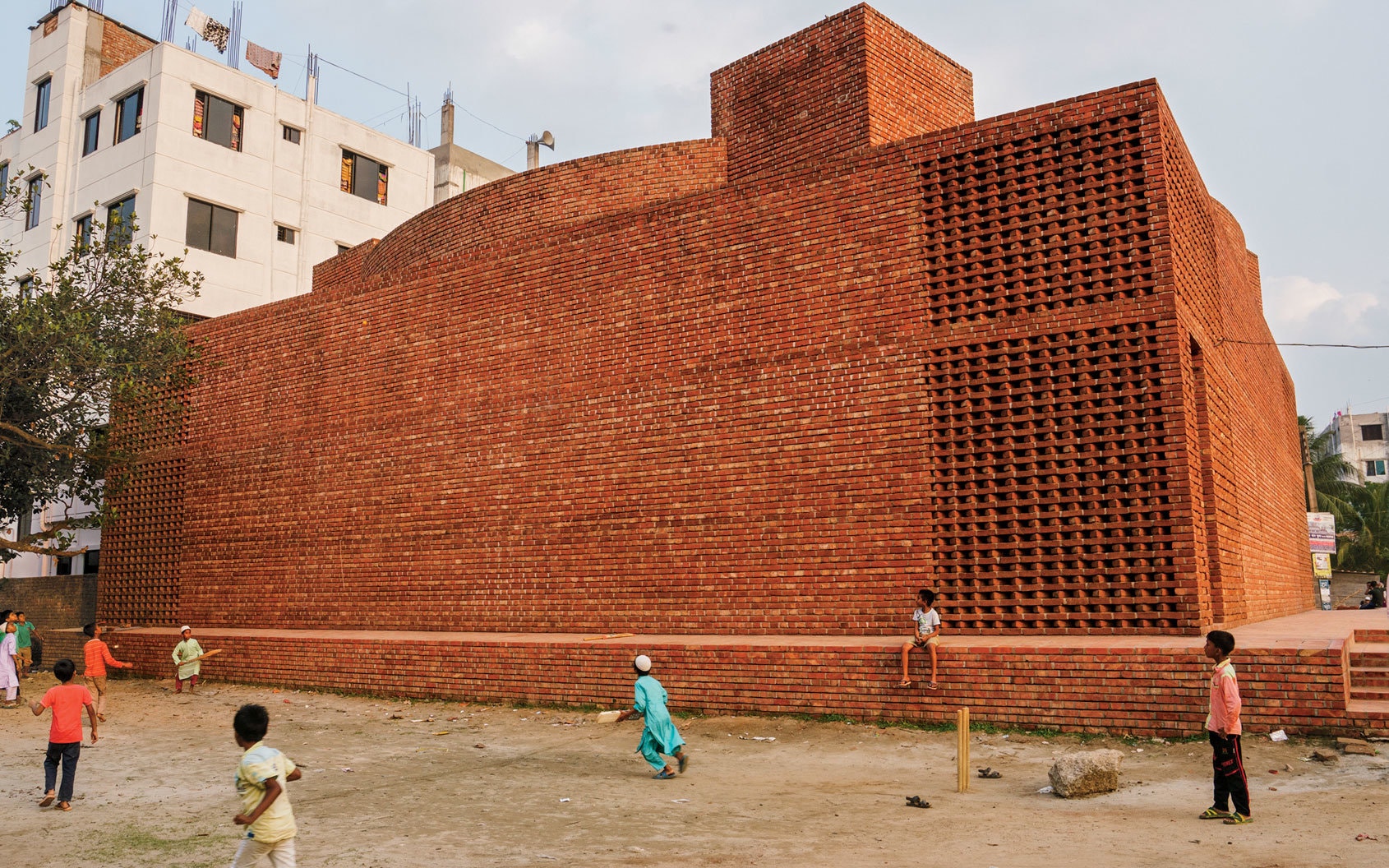 The brick facade of Marina Tabassum’s Bait Ur Rouf Mosque (2012) in Dhaka.

the concrete pavilion of Kashef.jpg